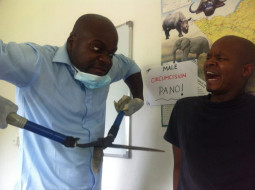 Creating great content is never easy, especially when you are trying to do it as something more than just a hobby. Your material has to be relevant, fresh and worth the audience or market’s time. When you’ve nailed that, you can then turn to tech to present it to the world for you.

Which is what the guys behind P.O BOX videos have done. This comedic crew are the latest in a surge of content developers and entertainers that have turned to digital media to develop a following.

Through Facebook, YouTube and Twitter the P.O BOX team distributes its own humorous skits and mockumentaries that have gained the attention of tens of thousands of viewers and a lot of followers on different platforms.

Looking at 2014, it was a breakout year for Zimbabwean content creators riding on digital platforms. Besides Zimdancehall artists that were leaning heavily on YouTube for video visibility , some of the more memorable examples of new age content distribution included the Zvinhu Zvirikufaya videos and its successful spin-off in the form of Zvirikufaya NaKeda. P.O BOX VIdeos joined the party later in the same year.

Looking at the two Zvirikufaya brands, the concept of social media virality was the centre piece of growth. The Zimbabwean community, whether local or abroad, uses Facebook extensively. If captivating content is shared there it will gain the right views and if this is done consistently there will be a community that forms behind this.

This is what the P.O BOX crew has managed to do effectively since they went live towards the end of November 2014. Most of their videos easily garner views north of 15,000 each and at first glance the numbers are low when matched up against more established comedy producers and digital distributors like Anne Kansiime.

However for a very new startup that hasn’t crafted content for the entire continent as yet, they are pulling views that can’t be dismissed.

They are bagging the views so what’s next?

Now that they have a name that means something to Zimbabweans on Facebook what’s next? Well any huge following can be monetised and exploited, there just has to be a smart way to do it that considers factors like the platform used for distribution and the market. Just look at Flyafrica and its Zvirikuflaya campaign.

In those respects P.O BOX have the same options as Zvirikufaya naKeda and Zvinhu Zvirikufaya. (P.O BOX refused to make an official comment on the plans for their content, brand or business model.)

Once the numbers make sense at the growth stage, advertising and brand placement can be explored. What has been an advantage for content like the P.O BOX videos has been the huge following of Facebook and WhatsApp by the local market, supported by the bundles for each service, which expands the potential viewership of their content.

As much as the cost of data could have been an impediment for distribution of content on channels like YouTube, the WhatsApp and Facebook views (edged forward by the bundles) increase the eyeballs which is a cornerstone for digital advertising.

It looks like #Team P.O BOX is already on that tip though, seeing that they worked out a brand placement deal with local apparel distributor HARARE TEES. If such partnerships are inked with other local brands, there could be a good payday for the team. Interestingly Zvirikufaya naKeda launched its own branded Kedha T-Shirts as one of its revenue streams.

However all these content creators appear to be keen on online TV in the not too distant future, if their Facebook names are anything to go by. It’s the same route that Zvinhu Zvirikufaya has been exploring, something that would call for a more aggressive content creation strategy.

With this route the revenue model still follows the advertising vein, although the diversification of content and potential for other distribution platforms means more appeal to advertisers as well as the option to share this content on other platforms other than their own. It’s what every content creator wants at the end of the day really.

8 thoughts on “How the P.O BOX videos are exploiting the opportunity of the internet”