A year now after the launch of Econet’s Dial-a-Doc health service, the Medical and Dental Practitioners Council of Zimbabwe (MDPCZ) is still to accept it as a positive contribution to healthcare services in Zimbabwe. Information we have received from the council is that doctors working for the service were brought before the council to answer for their involvement in a “prohibited” service.

Said the council in an email to us: “Since this is a matter of public importance the Ministry of Health & Child Care has been informed and the medical practitioners involved have been brought before Council to answer for violations of Section 97 of the Health Professions Act (Chapter 27:19)“. The email was in response to questions we sent after reading the MDPCZ’s current position in a bulletin it publishes for health professionals.

The statement in the bulletin reads: 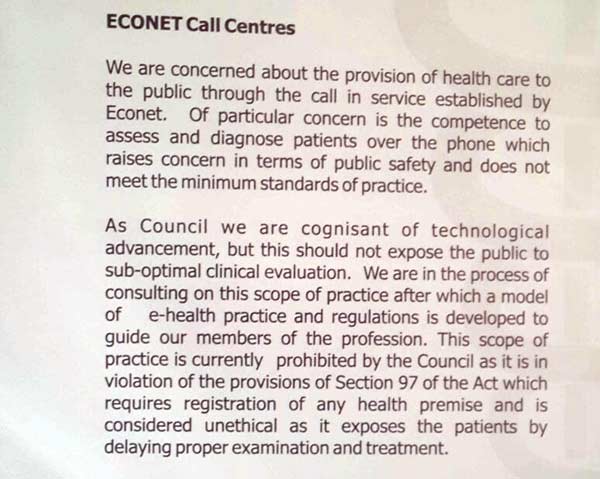 To summarize how Dial-a-Doc works: Econet has enlisted the service services of medical practitioners, who man a call center to help mobile subscribers with health problems over the phone. The subscribers are charged a premium rate of US 70 cents a minute for the call.

That some doctors have been ‘disciplined’ by the council for working for the service will likely dissuade doctors still working at the call centers, which in my opinion is negative overall. I personally don’t use Dial-a-Doc and don’t know anyone that does but I think that’s more about the price compared to alternatives – going to a hospital and seeing a doctor physically than paying Econet to be told to go see one. But maybe that’s because I have convinient access to doctor.

Since the council says it is consulting to come up with a model to regulate telemedicine we asked about the progress on that front. The council’s response:

Consultations have already resumed. Council has tasked a Committee to develop guidelines on telemedicine and Medical Tourism. We expect to present the draft guidelines before the end of the second quarter of the year.

On the Econet side of things Dial-a-Doc seems on low key though the company doesn’t like share figures. In fact, not sharing figures is a sign that a product didn’t do as well as expected. Uptake has likely been very low. But again that’s probably an issue of price than anything else. We asked the company what they feel about the MDPCZ’s insistence on Dial-a-Doc being prohibited and here’s their response:

The Dial a– Doc provides advice on health issues. Econet provides the technology platform on which the Dial a–Doc service is provided. As previously announced by Econet, Dial a–Doc is a partnership with qualified doctors who provide advice on health issues. Our partner has made a presentation to the MDPCZ to explain the service. The service is not new and is already available in several countries including our own neighbours in Zambia, Malawi and South Africa

Econet’s position is ofcourse a slight departure from their launch message when Dial-a-Doc was all about them innovating in health through Econet Health, to now them just being a call center partner for doctors offering the health advice.

It’s understandable why they’d change after seeing the rejection from a council that has the backing of the law to ‘discipline’ medical practitioners. It also doesn’t help that the Health Professions Authority of Zimbabwe, to which disciplinary disputes between medical practitioners and the council are escalated, is not a fan of Dial-Doc either.