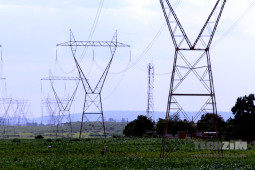 Wondering who to thank for severe load shedding ending in Zimbabwe? A report on Bloomberg this week might answer that question. According to the publication, demand for electricity in South Africa “has fundamentally collapsed” over the past 6 months, which has kept power supply consistent in South Africa and enabled Eskom to export power to Zimbabwe and Zambia.

The reduced demand in SA has been caused by the decline in commodity prices which has reduced manufacturing activity in the country. If this situation changes, that is if power demand increases again in South Africa, they could possibly be no sufficient power to export to its neighbours.

“Eskom has agreed to sell power to Zambia and Zimbabwe, both of which suffer electricity shortages. They are discretionary deals that can be downsized if South Africa’s grid becomes constrained.” says the report.

The information is in line with statements by a Zimbabwe Energy Regulatory Authority representative, Learnmore Nechitoro, at a Harare event recently when he said the power shortage problem in Zimbabwe. The only difference in recent years, he said, is that where in the past Zimbabwe could easily import power from its neighbours, high demand in the whole region means there’s not enough power to import. Reduced demand in South Africa would therefore mean there’s surplus power for SA to export.

While the availability of surplus power to import has been a good thing for Zimbabwe, the fact is Zimbabwe’s own power demand has also reduced. Zimbabwe’s manufacturing has reduced significantly, with large power consuming companies like Sable Chemicals shutting down. Sable alone was using about 40MW of power. Most of the country’s manufacturers have either shut down completely or stopped manufacturing (preferring to import and just brand the products) after failing to compete with imports.

Where in September last year, the whole country was under severe load shedding because ZESA could only provide 984 megawatts against a claimed demand of 2,000MW, Zimbabwe has managed to end its load shedding completely with a total 1,293 MW being supplied. Essentially, the difference, some 700MW of power, is no longer needed.

While load shedding is painful and negatively impacts any business, it appears load shedding ended not because a brilliant solution was found, but that the country’s economy and that of the wider region, is worse off due to reduced manufacturing.