After an initial surge in traffic when it launched last year, Econet’s classifieds property, Ownai, might be experiencing a sharp downturn in visits to the site. A look at the site’s estimate traffic using the SimilarWeb analytics tool shows the site has dropped about 67% in visits since December 2015.

See the screenshot above.

Without any official figures from Econet however, estimates are all there is to go on. We did contact them to ask for those numbers and they predictably declined to give them, citing a closing period and fear that competition would know too much. Here’s their response to our request:

Econet is in a closed period pending the release of its annual results and therefore is unable to comment on material developments within the group.  Also please note some  of the information required is competitive. We can however confirm that the trend you have mentioned does not reflect the actual performance.

The sharp rise of Ownai traffic in November actually makes sense because the site was launched at the end of November 2015. That and a generous helping of an SMS campaign soon after launch. However, if the Ownai SMSs in my phone are a reflection of what they sent to everyone on the network, there was only one SMS sent in January and another February. None has been sent yet in March.

This might explain the drop in traffic. But a traffic drop also means that there aren’t that many return visitors – a typical visitor would come to check the new marketplace out, maybe post an ad, close and never come back.

Another event likely related to the drop in traffic is the departure of Ownai’s Head of eCommerce last month. We, of course, have no idea why he left, and Econet wouldn’t say why only confirming the departure and promising an announcement would be made of his replacement. Thing is, a leader leaving just 3 months after the launch of their project is usually a sign that all is not well.

How this compares to Classfifieds.co.zw

To see the relative audience sizes, we ran compared the Ownai traffic trends to those of Webdev’s classifieds.co.zw, which has been the dominant marketplace platform in Zimbabwe for years now. The interesting thing we observe is that while traffic seems to have grown in January, their traffic also dropped in February, falling about 19% in total monthly visits. 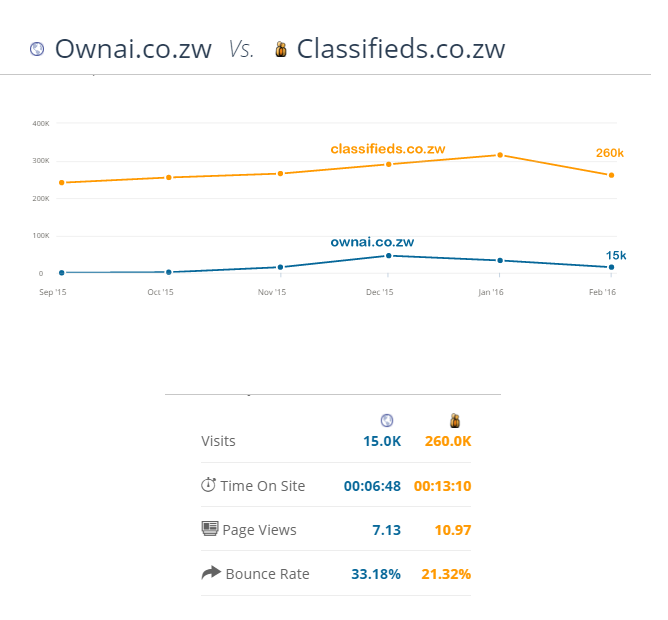 Again, in a relative sense of the figures instead of the absolute, Ownai is clearly a long way in catching up to Classifieds. The methods Econet employed to increase visitors to the site (Zero rating it for Econet subscribers + an SMS campaign) may not have yielded the significant difference we all expected them to. Might seem strange since zero rating seems to be working exceptionally well for another app on the same network, until you consider the differences in the apps.

Ownai’s value is in it having an adequate number of sellers and buyers (organic ones and not the ones mechanically seeded by the marketplace). Whereas biNu, for whom zero rating has worked, just aggregates content on the web and provides it to Econet subscribers who don’t have any data at zero cost.

It might be the case that zero rating makes little difference if the basic chicken and egg issue of marketplace liquidity has not been overcome. Or, put simply, free does not equal value. Organic value will likely take longer to develop with other value-adding differentiators being needed – like solving the delivery problem which existing marketplaces seem not keen to touch.