What Is The Best College To Study ICT In Zimbabwe In 2017? 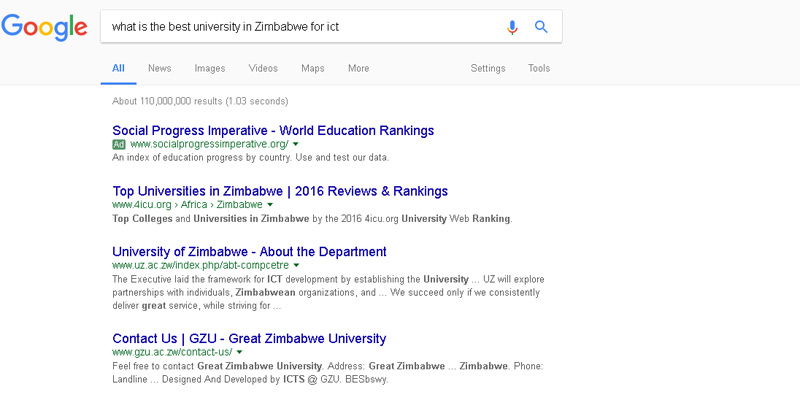 We’ve had WhatsApp groups for just about 3 years now. Largely targeted at Zimbabwe, members who reside here and issues that affect us (technology-wise) are discussed. Every so often however, we get questions to do with education.

Whenever I give examples, my mind goes back to the early 2000’s when I decided to do a programming course and due to there being not many options I went with a certain college in Harare along Robert Mugabe and Fourth Street. The lecturer was going over data storage sizes and made a remark that the biggest storage available at the time was in the MBs (I can’t seem to remember the exact size, but I know he stated MBs).

To this I refused and stated that he was wrong and we were now using ‘terabytes’ – at least that was the biggest size I knew then. A long argument ensued between the lecturer and myself, mainly because ‘his book said so’. He was basing his facts from a book he had in front of him from the late 1970’s or early 80’s but he didn’t want to move ground all because of his outdated book. That was my last lesson there as I threw in the towel.

I’ve returned to different colleges since then and one thing I have seen is that access to study material is limited. Mainly due to the cost of the books, but me thinks partly due to our culture of not wanting to buy books.

The rebuttal to this could be that we’ve now moved to the digital era and so books and learning material can be stored on flash drives, CDs and DVDs and one can read at their own leisure. I totally agree with this and hence I’d say so why go to in-person learning?

I always recommend someone to go to the University of Google or its affiliate ‘YouTube’. One just needs to horn the skills of knowing how to ask Google the right questions and it’ll give you the answers – millions of them many a time.

For those who are not as adventurous in wanting to find your want around search engines online, there’s a platform called Udemy, where lecturers (mostly people who are authorities in various topics) go and publish videos and other content around a topic and anyone can subscribe to it. Some of the courses go recommend that you’d have covered certain ground in a subject area before you embark on a course, but if you feel you can ‘wing it’ then they let you have a go.

This avenue is good for those who feel that they want a structured feel of how to do things and not leave it to any results that may have managed to bubble to the top of Google or YouTube.

If you are looking at polishing up your skills (or your CV – some courses issue you out with certificates) this coming year, Udemy have currently reduced almost ALL of their courses to just $10 each! (You can pay using your Ecocash Virtual Card Number (VCN) or your Visa or MasterCard).