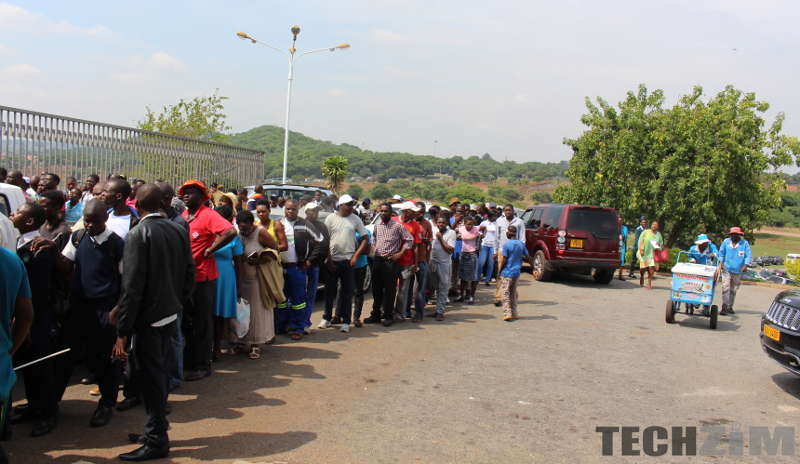 Just a few days ago, ZIMRA (Zimbabwe Revenue Authority) revealed how it had surpassed the revenue it had projected for the month of November (2017) by almost 30%. We had mixed emotions concerning this announcement.

Anyway, judging from their e-service downtime this month and the report that Newsday published today, that might not be happening again… well at least not this month.

Reports say that there has been ridiculously long queues at the Beitbridge and Plumtree border posts owing to the fact that staff now has to manually process import and export documents. This has been going on since Wednesday due to the ZIMRA’s Customs and Excise Department online systems breakdown.

In as much as I’m tempted to go on about the conspiracy theory that says that the systems breakdown was deliberate, more of a sabotage from some disgruntled employees which were suspended a few weeks back, I’ll stick to what matters.

Right now, ZIMRA workers are forced to go the manual route, though that also seems to be a dead end since a summary of one’s account is required when submitting the manually prepared entries. You might be wondering how that’s a dead end, well, the account summary is only available online, meaning manual entries aren’t too helpful either without the online data.

See how dependent on the internet we’ve become?

I guess this is one of those classic cases that remind people that we do need Cyber Security at national level after all.

Also, it speaks to how much we need backup systems/services if we’re going to go the online/digital route. Remember the ‘national’ internet blackout? Yes, it’s the same story, failure to have ‘functional’ backups.  I say functional in quotes because in that particular case a redundancy cable was there, but just not intelligently positioned.

Lastly, this ZIMRA incident indicates how important it is to make our online systems robust, especially when talking about fundamental services like ZIMRA. Not only is ZIMRA a major revenue generator in Zimbabwe, but it being positioned at the border means it contribute greatly to the impression foreigners have of the country. And at this point, we can’t avoid such slacking…