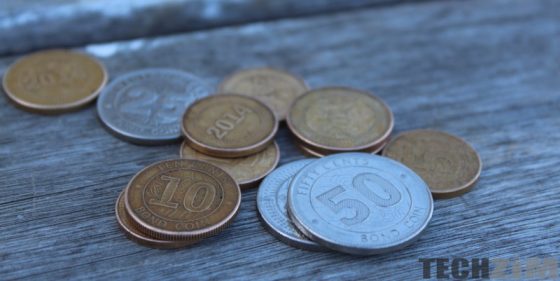 Today we were in attendance as Steward Bank launched Kwenga, an affordable and portable Point Of Sale (POS) machine for the masses. Also in attendance was the Deputy Minister of Finance and Economic Planning, Mr Terrence Mukupe.

Steward Bank CEO, Lance Mambondiani was understandably all smiles as he unveiled the Kwenga, or Kwengas to be accurate.  Kwenga is one heck of a product. The cheaper Kwenga costs just $35 but requires the user to have a smartphone. At cost most of the small businesses in Zimbabwe can afford a POS machine of their own.

Mambondiani announced that the bank will not be charging anything for transactions less than a dollar. That would mean if one was to swipe for their kombi fare (50c) or to buy a loaf of bread (70c to $1) they won’t have to pay for that transaction. As you know, bank charges are the biggest reason most of those who resist the cashless life do so.

Now if those small transactions we make every single day can be done free of charge, you can see more and more people not bothering to queue up at banks to get cash.

At the Kwenga launch, present were some fine folks from Pamushana, a transport company which partnered with Steward Bank to pilot the Kwenga devices. I talked to the conductor and he told me that people had warmed up to the idea of swiping for their kombi fare and some would actually wait for the Pamushana kombis in search of the convenience swipe brings.

The cost to not charging for the $1 transactions

I’m not going to lie to you. Sitting there, listening to the deputy minister I thought, ‘we’ve been hit by, we’ve been struck by a smooth politician.’ I thought that was the end of the story and Steward Bank would have to bear that 5c tax.

There I was just a few hours after the launch, minding my business and scrolling them tweets when I came across this,

We have removed the tax for any transaction below $10!!!

Wow, just wow. I’ve said it before that you may accuse the Mnangagwa administration of a lot but inaction is not one of those things. I said it but I was genuinely surprised to see such a response in such a short period of time. This is what we like to see.

Mambondiani had asked for the 5c tax on $1 transactions to be scrapped but the government took it to another level. There will be no tax for transactions below $10. The government really is trying to promote the ‘cashless society.’ No tax on the $10 transactions should see even the bank charges on those $1.01-10 transactions decrease. Just like we saw when duty on fuel was reduced, the final consumer should see a price decrease.

[We now have more information: the government has announced that the tax reduction will be with immediate effect. The Finance Act has been amended thus:

It’s an exciting move but we know it means reduced revenue for the government, in the short term at least. This may be a bad thing if you consider that the government’s expenditure already tops revenue and moves like this one and the reduction in fuel duty further eat into the already inadequate revenue.

Having said that, the hope is that these pro-business tax reductions should promote production and attract investment and actually lead to better tax revenue collections for the government in the mid-term.

Let us know what you think about all this in the comments below.