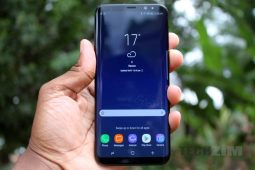 Samsung’s mobile payment and digital wallet service –Samsung Pay- is now available in South Africa, making our neighbour the first African country to have the service enabled. The service was in beta around the beginning of this month

Users just have to download the Samsung Pay app on a compatible device (i.e not all Samsung smartphones) and go through a registration process. At the time of writing the service can only be linked with two banks; Absa and Standard Bank.

Using Samsung Pay will be much more secure than traditional methods of payment as you can authenticate purchases using the fingerprint scanner, IRIS (facial recognition) or a more traditional PIN if that’s your kind of thing.

Samsung Pay works on both magnetic secure transmissions (MST) and near field communication (NFC) point of sales machines. This means that businesses won’t have to revise their entire system in order to enable Samsung Pay users to make transactions. This seamless transition will no doubt ensure that users actually find utility in the availability of Samsung Pay.

EcoCash, OneMoney and Telecash should step up and offer a similar method of transacting. Phones with fingerprint sensors are no longer a rarity to be honest. Instead of having to type out a PIN every time you transact via mobile money, it would save everyone so much time if they could just approve transactions using their fingerprint scanner.

Even QR codes are a good option. I know that its not everyone who has a smartphone capable of scanning QR codes but the number of people who do is significant enough to warrant some improvements in the way we make payments.

A few months ago, a QR option appeared in EcoCash’s mobile application so this is clearly something they are working on but EcoCash is yet to announce when this will actually hit the market. Hopefully this is made open to the public sooner rather than later…