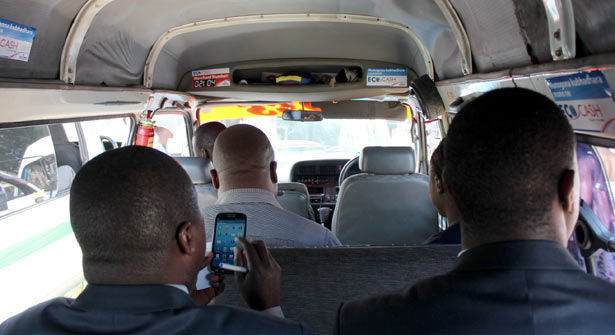 So the new kid on the payments block is City Card, an NFC card that allows passengers to pay for their ride by taping the card against a tolling machine on board.

Ecocash tried this some time ago but it didn’t take off. City Card will probably meet the same bumps in the road.

The biggest challenge is that the public transportation system in our cities is run by broods of touts whose self-appointed ‘job’ is to tell people which omnibus (kombi) to board as if the passengers don’t know where they are going. For ‘this service,’ the touts are paid a fee equivalent to the fare of one or two passengers by the kombi drivers.

This is not because the kombi drivers appreciate the ‘service’ rendered or see value. It’s because the touts said they want to do this and they literally have the muscle to collect the tribute. These guys are at our bus termini because they have loose political connections that permit them to be there. They will resist anything that results in commuters not using cash to pay.

So there is money that drivers and conductors of commuter omnibuses call “mari yemusana“. Literally, it means money for the back but I don’t know why it is called thus. This is nothing but money they steal from their employer and take for themselves.

Obviously, the drivers and conductors will join the hwindi’s to resist electronic forms of payment.

The Zimbabwean forms of money

In Zimbabwe, money has different value depending on what form it’s in. Bottom of the value pyramid is money held in a bank account, followed by money held in a mobile banking wallet. After that comes Bond Coins which are the predominant form of money people are using to pay for kombi these days. Above Bond Coins are Bond Notes and then of course top of the pyramid are real US dollars.

Kombi owners will resist receiving electronic money as long as this order exists because it entails them accepting an inferior currency to the one they are getting right now and why on earth would they do that?

The owners of the kombis will also resist electronic forms of money because the differential in value explained above gives opportunity for arbitrage. They will want to ‘spin’ money and they can only do this when commuters are paying in cash:

They get the cash and buy US dollars cheaper on the black market than if they were going to buy US dollars with money in their bank accounts. Buying US dollars is important to preserve the value of their money and to be able to buy spare parts or to pay school fees for their kids who may be at schools that now demand payment in greenbacks alone.

Not much use for commuters

The commuters themselves have not much incentive in acquiring a card and then prefunding it so they can use it for kombi. They are getting by with Bond Coins as it is and the card could be the medicine that came too late. A good number of consumers do not plan that well so they will perceive loading money into the card as locking money in. They want to pay for the kombi at the moment of commuting and not 3 days before…

To be honest the card would be very useful to the nation because it will cut the loss of productivity as a result of people queuing up for cash at the banks just so they give it to the conductor. However, it’s still a very steep climb!