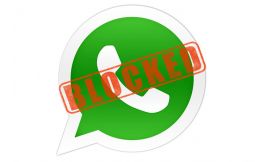 WhatsApp is the world’s most most used instant messaging app. With about 1.6 billion users, WhatsApp is used in 190 countries. However, while many individual and businesses enjoy the benefits of WhatsApp in their countries, the instant messaging platform is not available in some countries and some of its features are restricted in certain countries. We take a look at some countries that have banned WhatsApp or where you can’t use some features of the app.

Some believe that the service was censored in the country due to its strong encryption features which limits the Chinese government’s ability to snoop into it’s citizen’s chats.

On the other hand, other reports say that the Chinese Government censored WhatsApp in the country to promote the use of WeChat, which it can snoop.

In North Korea as well, WhatsApp services is blocked. Reports have it that the app’s end-to-endencryption limits the ability of the government to keep track of communications in the country.

If you’ve got plans to visit any of the countries listed above, perhaps for vacation or work, you should research some alternative apps other than WhatsApp. Some folks use VPNs to evade the bans and restrictions.

When in the United Arab Emirates (UAE), you can not make video or voice calls via WhatsApp. This is because the UAE wants to promote telecommunication services based in the country and ultimately increase the country’s fiscus.

Update: Initially, we had said that WhatsApp was blocked in Iran & Syria but we later found out that it’s not.

20 thoughts on “You Cannot Use WhatsApp In These 3 Countries”