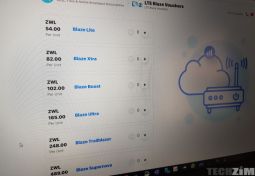 Despite reporting that TelOne had an upcoming service -Blaze- leaked, it seems the product is already available though an official launch event will follow soon.

We already know that Blaze will be an LTE based service and packages being sold by Paynow indicate Blaze will come with 6 packages:

These names are very different from the ones that first came out as part of the leaked images and it’s not yet clear how much data will be available on any of these enthusiastically named packages. That’s why we estimated one package using info from the leaked picture from two weeks ago.

Anyway, it seems if you walk into a TelOne shop today, chances are high you’ll leave with your Blaze LTE sim card in hand.

One thing I have to say about this service is that I do hope it has widespread connectivity that’s better than ZOL’s LTE line – which doesn’t work in Avondale and other low-density suburbs. For a line you pop into your phone and move with this is kind of senseless and makes ZOL’s LTE line less attractive to people like myself who bought the line only to have it not work.

7 thoughts on “TelOne Blaze Vouchers Have Started Going For Sale, Seems You Can Already Sign Up!”