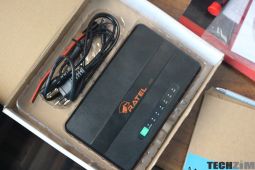 There’s nothing new you can tell a Zimbabwean about load-shedding… Our current electricity crisis has been ongoing since April/May last year and we’ve become accustomed to having no power or looking for alternative sources of power.

One of the not-so-shocking things that happens when citizens in a country don’t have power for 16-18 hours each day is that they’ll use their electrical appliances much less than they did before.

The effect this has on the economy hasn’t been talked about that much but when you consider the fact that for the 1st time since POTRAZ started sharing their reports, fibre subscriptions went down in the 3rd quarter last year.

Without electricity to power routers and with the cost of the internet constantly rising, a number of people have just decided to stop paying for their fibre subscriptions.

For some people – a significant number actually – their jobs don’t allow them to just ditch the internet. If you can’t afford an inverter/solar system as a company/individual, what’s the next best thing?

A portable battery solution that can power up the internet will probably do the trick. The OmniPower Ratel 430s. It’s a 2000mA small battery you can use to power your portable WiFi modem or your actual router and stay connected to the internet during those hours when ZESA decides to yank the power supply.

There are spec junkies and to be honest with you, I’m not one of those. At times – I am- but in this instance, I wanted to just test the device and see how well it works.

The user manual that comes with the Ratel 430s suggests you can use the battery to power/charge the following devices:

Off to a slow start

I was a bit concerned when I saw the 430s’ battery capacity of just 2000mAh since this is relatively tiny if you’re charging a phone. Initially, I tested it by trying to charge my 3000mAh phone. Whilst it charged my phone pretty quickly with its 10w charging I would only suggest users of this device to charge their phones with it, if it’s an emergency.

To be fair, the 430s isn’t a power bank and using it as a phone charger is judging it on the wrong merits – and the Micro UPS would prove its worth once I connected it to my WiFi router…

“Can’t keep a good UPS down”

When I plugged in my WiFi router into the 430s to draw power I expected the UPS to fare better than it did when charging my phone but I wasn’t sure just how much of an improvement it would be.

At first, I had some trouble getting the router to work properly. Whenever I connected it to the 9v output on the 430s it would turn on but actually not transmit any signal to connected devices. Solving that was as simple as flipping the switch from 9v to 12v and it started working flawlessly.

The 430s powered my WiFi router for an average run time of 7 hrs 15 mins. Much more than I expected given what had happened during the charging test.

At the 3 hr 45 min mark, the 430s would still have over 50% of its battery left – which means it can keep your internet connection up for most of the working day. If you work from 8-5 which is 9 hours, you’ll have power for approximately 80% of your workday. If you decide to switch off the router during the lunch hour or two then you’ll be able to stretch out a full day of work with the 430s which is what most will be looking for in such a product.

If you want to use it at home after work it will probably be even more convenient since for most that will mean from 6 -10 pm which the 430s will be able to achieve with no problem.

Verdict: At a cost of US$70, I think the 430s is a good product and one I would recommend. It’s also important to keep in mind I only tested it out for the duration of a week and so I can’t speak on how the Micro-UPS fares over the long term which is pretty important since our power cuts mean you’ll be charging and discharging the 430s or whatever solution you go with on a daily basis.

Get in touch with Sidney who lent us the review unit and is selling the 430s Micro UPS devices for US$70 and additional solar panels for charging on 0772339260.