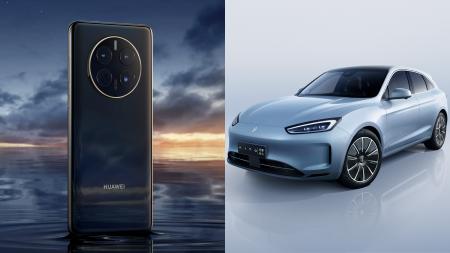 Huawei held its September event and it was one long one. Rightfully so because they had a lot to show us and here is the rundown.

They have finally landed and they are as shiny as advertised. Nothing is really out of this world when it comes to the specs of these smartphones. The highlight features are these.

The Mate 50 is coming in with a punchole for the camera whilst the Mate 50 Pro and Mate 50 RS will go back to using the notch instead of the pill-shaped cutout that was on the Mate 40 Pro.

The Mate 50 Pro and Mate 50 RS still have the face detection and gesture navigation tech that was in the Mate 40 Pro baked into the notch.

They all will also come equipped with satellite communication tech allowing them to be able to communicate directly with satellites in space in the event that you find yourself stranded in an area with no mobile network coverage. So how it works is that you download and set up this app called Changlian. It will then be the terminal that will connect to Beidou satellites for sending text messages via satellite.

Unfortunately, communication is only one way so you cannot receive messages via satellite, and also the service at the moment is only available in mainland China excluding even Hong Kong, Macau, and Taiwan.

After the P50 series, Huawei officially cut ties with Leica for their camera collaborations and has since introduced XMAGE. Essentially it’s their own image processing tech that builds up from where they were with Leica offering just overall better image quality and better low light performance.

Speaking of low light, remember the Galaxy S9+ and its 2-stage variable aperture sensor? Well, Huawei has brought the same tech to the Mate 50 and Mate 50 Pro only this time it’s a 10-stage variable aperture from F1.4 to F4. They claim that in its brightest setting of F1.4, the sensor lets in 24% more light than what the Mate 40 Pro could pull off.

Huawei has not been using Gorilla Glass for a while now even before the US trade ban. All this time we were running with “Strengthened glass” when it came to the type of protection we got on the display. Well, Huawei finally slapped a name to their glass strengthening tech and they are calling it Kunlun glass.

We don’t really have data on how it performs vs Corning’s Gorilla glass but it got a 5-star certification by SGS in Switzerland with a claim that Kunlun glass is 10 times more resistant to drops.

Still no 5G. Still no Kirin.

The US trade ban still exists and as a result the Mate 50 series still does not have Google Services but even more so, there is no 5G connectivity and also no Kirin processor. In fact, this is the first Mate smartphone range to make use of a 3rd party processor. This time it is a 4G version of the Snapdragon 8+ Gen 1 chip. A couple of drawbacks to the Mate 50 series that will affect its global sales.

Huawei made a car. The Aito Wenjie M5

Just to be clear, Huawei worked with an already existing car company called Celis Automobile to co-create the Aito Wenje M5. Regardless, Huawei’s biggest influence on the car was the battery pack, driver aids, and safety technology, and entertainment and infotainment in the interior which are pretty big parts of the car.

And this is not a showpiece for non-car-related tech like Sony’s concept car unveiled a couple of years ago. This is a car that exists and that you and I can buy if we can find a link to China.

The performance is shocking

The car is an EV just in case anyone was wondering and it comes in 2 models: Standard and Performance. The difference being the standard is rear-wheel drive only with a single electric motor pushing out 200KW of power and 360 Nm of torque.

Then the performance has 2 electric motors, one front and one rear making it all-wheel drive with a rear-wheel drive bias. In total it’s pushing out 365KW of power and a very meaty 675 Nm of torque. In fact in the presentation, the performance benchmark they had was a Tesla Model Y on the range.

The standard version has the best range of the two at an impressive 620Km on a single charge with the Performance edition getting 552Km of range from the same 80KWh battery. It supports up to 100KW fast charging that can get the battery from 30% to 80% in just 30 minutes and a claimed 120Km of range after a 10-minute charge.

And on efficiency, they managed to pull off a drag coefficient of 0.266Cd making it more aerodynamic than the likes of the BMW iX3, Mercedes Benz EQC, and Audi Q5e-Tron, some premium electric SUVs in its class.

Because they are EVs they managed to put a storage compartment in the bonnet as well providing up to 80L of bonnet storage space. The back has 369L of boot space that can be further extended to 776L with the rear seats folded down.

The inside of the Aito Wenjie M5 looks very elegant and absolutely premium. There is extensive use of genuine Nappa leather and some open-pore wood veneers. It’s honestly really good looking inside with a very clean design language. Something really similar to what we see in American EVs like Tesla, Rivian, and Lucid. Something fresh.

The Huawei Influence in the interior kicks things off with 2x40W wireless charging pads and 3 USB C ports all supporting 66W fast charging good for Supercharging Huawei smartphones or most laptops that charge via USB-C essentially allowing you to work in your car.

Speaking of working in your car, the 16-inch infotainment screen can also be used as a wireless display if you own a Huawei smartphone, tablet, or laptop. You can project to it or just extend your display just in case your needs require a lot more screen real estate.

The infotainment system is also running on HarmonyOS meaning it will seamlessly communicate with all HarmonyOS devices Huawei makes. The cool part about it is that the 1st party navigation system in this car will be a lot easier to use. The bad part is that it does not look like it will support Apple car play or Android Auto.

On Top of that, there is facial recognition built into the A-pillar and this can be used to register multiple driver profiles. So you can set up the car the way you want for stuff like driving modes, seat positioning, the contents of the infotainment system like buttons and widgets, and climate control.

So when you sit on the driver’s seat it will detect your face and set everything in the car up to your preferences. No need to be asking everyone who uses your car to not touch stuff. Facial recognition can also be used for security purposes. It can be set up that if an unrecognized face tries to drive the car, it simply will not move.

Another impressive use of this is adjusting the level of the HUD on the windscreen depending on where your eyes are gazing. Facial recognition will continuously monitor the position of your eyes and adjust accordingly.

There is a camera in the cabin just above the rearview mirror that can be used for in-car video calls. There are also 4 mics in the cabin to ensure good sound pickup of everyone in the car when such calls occur. You can also switch between the inside-facing and outside-facing cameras during these said video calls.

And we cannot forget the sound system now, can we? It’s a bespoke Huawei setup with 19 speakers giving a 7.1 Ch surround sound and also 4 of these speakers are in the driver seat headrest for calls, navigation, or just a private music session. The amp that’s running things is a 1000W system.

On paper, the Aito Wenjie M5 EV seems to be one heck of a deal. It’s definitely got some serious performance, it’s very good looking inside and out and it’s running on some class-leading tech features all whilst still being cheaper than the competition. The only problem is there does not seem to be a global release yet so if you need one you may have to pick it up from China. Also, there is no guarantee that there will be an English-language option for the systems running the car.