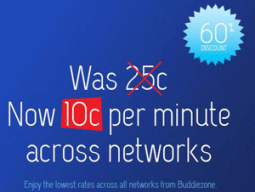 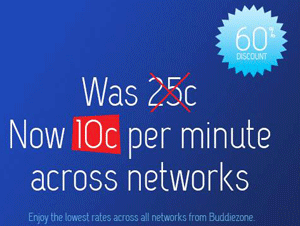 Under the onslaught of never-ending steep promos from the competition, Econet has today finally announced the a serious slash of mobile tariffs in a move that can only be described as taking the fight to the competition. The tariff slash is, according to the announcement, by as much as 60%. On mobile tariffs it’s the one move the company can genuinely claim to be a first in Zimbabwe. And a move that will likely kick the competition into a price slash too, and finally, after 4 years or expensive telephony, Zimbabweans get some relief.

Voice calls across networks have been slashed by the operator from 25 cents per minute to 10 cents per minute. Econet to Econet calls will have opportunities for an even lower tariff via the Econet Buddie zone promo which discounts calls by optimising network infrastructure resources available when subscribers make calls. According to Econet, Buddie Zone calls will be discounted by up to 90% which will see subscribers pay as low as a 1 cent a minute for a call.

Econet slashing tariffs is a big deal with big repercussions on everyone in Zimbabwe. The company has over 8 million mobile subscribers, which is close to 70% of Zimbabwe’s total population. Needless to say, they account for the majority of mobile voice and data traffic in the country.

Econet Wireless, Zimbabwe’s largest telecoms company, has slashed the cost of calls to other networks by a massive 60%, the deepest tariff cut ever introduced on the market.

Econet said the new tariff was “unconditional” and would be “effective immediately on all packages and at all times of the day.”

In a statement, Econet Wireless CEO Mr Douglas Mboweni said that all Econet customers would now also enjoy Buddie Zone tariffing with discounts of up to 90%.

Mr Mboweni said: “Econet will mount an extensive campaign to show that it not only has the cheapest tariffs but it also has the best value for money. Our tariffs are unconditional and we do not ask you to buy something extra or spend so much to get something. When we give, we give. We are not the largest operator by accident. Our customers know that the value that we give them in terms of coverage, network quality, services, products and tariffs cannot be matched.”

Mr Mboweni dismissed the notion that his company was afraid of competition.

“We have the cheapest tariffs and it will remain that way. We have the best coverage and we will continue to broaden it. We also have the largest range of products and services and we will keep investing and introducing more,” said Mr Mboweni.

Announcing the tariff slash to followers on their Facebook page, Econet gave a side jab to the one company that has been causing them headaches these past few months: “no mega deal can match that“!