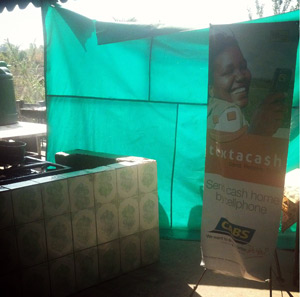 If you have worked or stayed in the Avondale area in Harare, you probably know of a popular food place at the flea market where lots of people religiously enjoy their lunch everyday. I visited the place with a friend today and we were quite intrigued to find they are now accepting Textacash mobile payments. Intriguing because the place is not your usual restaurant hey; it’s something much more informal – open fire, a limited menu of Sadza & something, a makeshift tent for the eating area etc… We would have expected to find the equally informal EcoCash there instead. But maybe that’s a sign we haven’t been paying attention, who knows!

Anyway, we asked the lady doing Textacash registrations behind a desk if they’d considered having EcoCash as well. Her response (she’s the manager of the place we think) was that EcoCash were actually first to approach her with an agentship/merchant offer. The problem, she said, was that they required US $1,000 deposit from her, and not having such an amount she had to decline. “The CABS people though,” she said, (CABS is the bank behind Textacash) “had friendlier terms and we accepted immediately.”

She also mentioned the issue of Textacash tariffs as something that’s easier on her customers than what she referred to as a much more expensive EcoCash. Textacash has much lower tariffs (a maximum of 1% plus 20 cents of the value of the transaction) than EcoCash does. We wondered though, but didn’t ask her unfortunately, about the commission comparisons of the two. Maybe moot if you can’t afford to sign up for the other?

Observing her serving customers, she kept explaining to them that with they could only transfer money to other mobile phones if they were using either Telecel or NetOne sims. Econet, she said, won’t allow it yet the reason being that they have a competing service – EcoCash. Remains an issue for CABS (and the other ZimSwitch Shared Services partners) as Econet has the bulk of mobile subscribers in the country; around 8 million, which accounts for over 60% of the subscriber share locally.

Would be interesting to hear in the comments what other agents reading this have experienced in terms of being an agent of either. Of Kingdom Cellcard, NetONe OneWallet and Tetrad eMali as well if there are any.