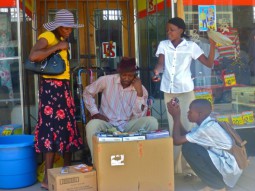 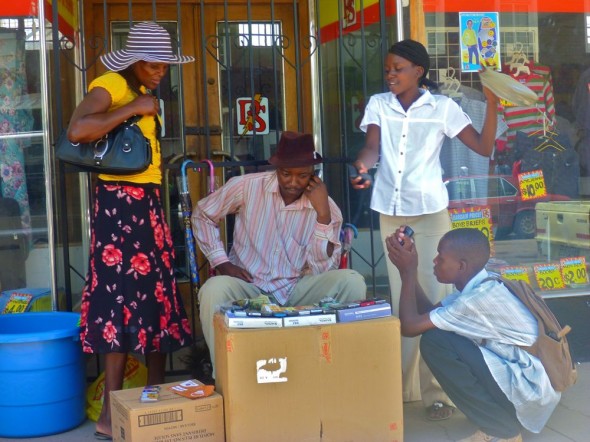 Owning a smartphone means a lot these days, twice as much if you consider where you purchased it. While companies a la Apple have their own brick and mortar stores, third-party stores the likes of Goldtech Electronics come in a close second. Usually, this is an option if you’re purchasing a brand new device out of the box.

Most people don’t have that luxury, and here in Masvingo it’s no different. If a relative living beyond borders doesn’t get you a smartphone overseas, then you might as well choke it up. It’s that or nothing, but that’s only half of the problem. Non-ubiquitous access is one thing but price brings a whole new subject to the table. This is why “sidewalk smartphones” are taking home the crown.

It’s a pretty simple setup. A wooden frame support that holds up a cardboard surface for the phones. Two or more makeshift chairs, and more than one guy (with persuasion on their side) to hammer down the deal to hit home a reasonable price.

These second-hand smartphones are a no-brainer. Sidewalk smartphones, like pirated DVDs are cheap but they also come with a few compromises, some even deal-breaking. The big caveat is you won’t be presented with the problem upfront if the phone has any technical flaws. The catch being if you don’t find the problem on the spot then there’s none. By these means, you already know what you’re buying yourself into.

In contrast, local retail stores sell “good enough” low-end smartphones at a high price to maximise on profits. The less tech-savvy layman usually falls for this. At almost the same price, high-end smartphones like the iPhone 5 and mid-tier devices like the age-old Galaxy S3 are sold at a decent price on the sidewalk.

Retail stores are also stuffed with tons of Chinese knockoffs, some with modded versions of Android 2.3 Gingerbread modded to mimic modern versions of Jellybean. These knockoffs perform really bad, with shortcuts taken on components at every turn. This alone makes a huge difference and it shows. The sidewalk continues to show that they will offer a better option over retail stores in Masvingo hands down.