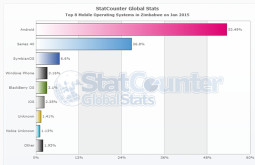 Move over Nokia and Symbian; Zimbabwe is now officially an Android market. The latest figures from GS Statcounter for the month ending January 2015 place Android as the leading operating system (OS) for mobile phones.

53.49% of mobile devices run the Google-owned OS, which has managed to overtake the Series 40 that is used on Nokia feature devices. S40 now holds 26.8% of the market, with Symbian OS which also a Nokia feature phone system pegged as the third most visible OS with 6.6%. 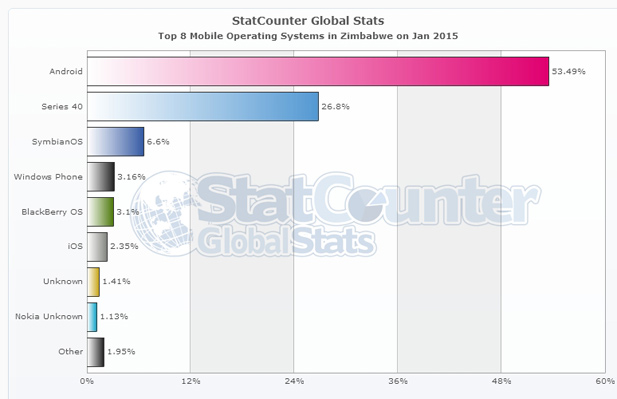 This huge drop for Nokia is what everyone has expected though. Firstly the Symbian OS was discontinued by Nokia, which is now owned by Microsoft, and it turned to Windows as the main OS for its mobile devices.

The Nokia brand hasn’t been faring well in other markets either and Zimbabwe couldn’t have been any different especially since Nokia isn’t as aggressively advertised as brands like Samsung and Huawei that are doing a lot to become household names in African mobile tech.

Just four months ago Symbian held 34% of the local market ahead of Android’s 27.73% share. This “Nokia legacy” that has been pushing this OS was largely attributed to cheap feature phones like the Nokia C3 and Nokia X2, which have now been replaced with newer versions.

The rise of Android in Zimbabwe doesn’t come as a surprise either, especially with the way entry level smartphones which are the mainstay of smartphone uptake, almost always come with Android. It is a trend that has been supported by the distribution efforts of every major local phone distributor.

Brands like Huawei, Samsung and ZTE have become the calling cards for the smartphone distribution strategies of various device retailers, largely because of the wide variety of options that they provide for low to medium-end market.

Even mobile operators Econet Wireless and Telecel have credit options largely targeted at Android devices thanks to distribution partnerships with Huawei, Samsung, ZTE and in the case of Telecel, Gtel.

Gtel and Astro, the two Zimbabwean brands, have also been pushing Android devices for both the low and high-end markets. These two players have carved out a niche providing devices to civil servants with relaxed terms of credit. This is a huge addressable market, considering that the government is still the largest employer in Zimbabwe.

In all of the rage surrounding Android, Blackberry (with 3.1%) and Windows (3.16%) which are nowhere near the top as popular operating systems, still have a larger following than Apple’s iOS that occupies 2.35%.

Apple’s iOS is the second most popular OS globally with a 22.75% market share, but it just hasn’t been as prominent in Zimbabwe which is undoubtedly linked to the high cost of Apple devices. this is something important to consider for any developers of apps for the Zimbabwean market.

The local market is still all about entry level to mid-range mobile devices, something that ought to be the case until our low smartphone penetration rate shoots up. Efforts to do this have been slowed by the added duty on smartphone devices. This will just mean that Android will continue to grow as fast as it has in the past couple of months.

The figures used in this article have been provided by StatCounter. More details on their methodology are available on the StatCounter site.