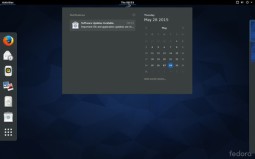 Well this certainly is not Ubuntu.

Before we begin may those who use or have ever used Fedora for anything other than professional flirtation please raise their hands up. If you are one of those who still do I would appreciate it if you, upon your sad passing, donate your body to science so that we can examine your brain and understand how weird people work.

It would no doubt provide valuable insight into the minds of people who still think the General is alive and living somewhere in North East Africa, Zimbabwe will one day win the World cup in this current millennia and Wayne Rooney is a world-class player.

In fact, you do all the boring things you can do with a hundred other distros, with the same sort of indifference while you wait for Fedora 23 to come roughly six months from now. If it comes then, for the Fedora development team is only rivaled by the Debian team when it comes to their unpredictable release schedule.

To be fair, the team values quality of code over release cycles and will only release a version once it’s ready, while the Debian team probably spend their time stomping at each other’s throats during the delays. The delays are still a problem nevertheless.

You do not want to install Fedora on a production and server and not know when the next version will arrive. In addition probably the most important reason for you not to use Fedora is that there is no LTS version at least to my knowledge. While changing your Samsung Galaxy (the Chinese ones), wardrobe and Desktop OS can be fashionable every six months, it is not ideal for software developers or server admins. Spending time in the /etc/ directory is not fun.

There are currently three flavours/versions/or-whatever-you-call-them of Fedora. The Workstation version for use on Desktops and Laptops, the server version for those who would be foolish enough to run a Fedora server, and a cloud version for you to use in the cloud to do all the things you are better of doing with Centos.

Back when I chose Ubuntu as my sweetheart, I considered several things, because the decision came down to either Fedora or Ubuntu. The problem with Fedora was it had a separate Live CD that you could not use to install. Given the fact that you had to actually download both ISOs or risk nasty surprises with hardware (plus the slow dial-up internet back then), the fact that Ubuntu’s live disc was shipped free of cost and could be used to install the system.Ubuntu won that argument.

Then there were the installers. Ubiquity back then was an installer far ahead of its time and I would imagine that even the folks at Microsoft took notice and spend hours in their labs looking at the code and learnt from it too. Fedora’s installer, Anaconda, while impressive was simply no match then. As a novice, I appreciated the simplicity of Ubiquity and only learned how to properly use Anaconda without clubbing my disk in an IT course.

Then there were the repositories. Maybe that’s changed but I do not like XML files at all. They are not human-friendly and the Fedora repositories are configured in that format. Changing them, as XML illiterate as I am to this day, was a hustle. Ubuntu’s repositories were edited in plain text, and at least to me, easy to understand. Add the fact that we already had a bustling Zimbabwean mirror that I could easily add and the whole thing was a no-brainer.

That was me, but most people who preferred the Red Hat way still stuck with Fedora because it was the closest thing until CentOS happened. It was, Centos was, basically free Red Hat which offered the best of both worlds: Long term support for those who needed it and bleeding edge technology for those who want to change their OS more than they do their underwear.

For example, CentOS 5 released in 2007 will be supported until 2017 and that’s something most people can live with. The focus should be on productivity not on system software.

The problem with Fedora is that it is a Red Hat proving ground and Fedora users get to be the lab rats and lab monkeys who are regularly subjected to experiments in the name of bleeding edge. While this is cool, it has made less and less sense ever since CentOs joined Red Hat.

Back to my review: well I installed the ISO on my USB using Pendrive software, looked at the blue desktop, opened Firefox to check my email, went on Facebook, the Techzim website, blogged at bit on my own blog before going back to Ubuntu.

Oh it works; it’s fast and responsive and works just like Centos and Ubuntu.The headline is that “Fedora drops yum.” I don’t even know what the fuss is all about so instead of saying:
yum --do-stuff          You will have to say
dnf --do-stuff

Yeah, big deal! It’s like saying Robocop 2014 is better than Robocop 1987. As far as I am concerned it’s just another Red Hat experiment.

Fedora is OK . It does all the things that you can do with the other distros no less and no more. One should never consider switching from say Centos to Fedora, but if you insist you can get all the three versions of Fedora here. I can promise you though, that the whole experience can be kind of underwhelming.