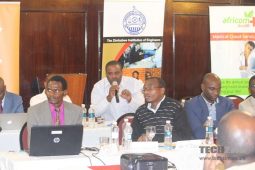 Zimbabwe’s draft Computer Crime and Cybercrime Bill has drawn a lot of interest this year and this is largely due to the fact that plans are underway to craft it into law.

This process has included consultative meetings that the Ministry of ICT has been engaged in with various stakeholders. The Zimbabwe Institution of Engineers (ZIE) was the latest grouping to contribute to the drafting of this law.

One of the ZIE’s affiliates, the ZIE Information and Communication Technologies Division (ZICT) held a Computer Crime and Cybercrime Bill Workshop in Harare.

This was an opportunity for Zimbabwe’s engineers and other stakeholders to examine the draft bill and make their own contributions to the piece of legislation before it becomes law.

Part of the full day workshop’s proceedings were some presentations on aspects related to the bill such as its main tenets (this was presented by Kuda Hove), an assessment of the bill’s regulatory impact (led by Kangai Maukazuva) , digital rights and the obligations of service providers (led by Koliwe Nyoni) as well as a focus on the impact of data in cybercrime (led by Chris Musodza).

There was also a keynote address from the Permanent Secretary in the Ministry of ICT  Sam Kundishora.

Several participants at the workshop took the opportunity to highlight their concerns with the draft bill and to make suggestions on what should be included in the final draft.

Some of the concerns raised focused on the manner in which the wording of Bill could easily be misinterpreted and give law enforcement room to abuse citizens rights to privacy. This was demonstrated by clauses that empower any law officer to easily acquire a warrant to confiscate and go through cybercrime suspects’ devices as well as devices used in that same network.

Other examples included the bill’s interpretation of how law enforcement agencies will be empowered to use spyware tools like keystroke loggers in investigations without users’ knowledge.

Some participants also highlighted the risks of allowing law enforcement to divert data as outlined in the draft bill. There was also debate around the makeup of the Computer Crime and Cybercrime Management Centre which, according to the bill, will be comprised mostly of security forces and service representatives from institutions like the army to the national prisons service.

There were also issues raised around the criminalisation of ICT professionals who, under the current draft bill, would be obliged to help in cybercrime investigations, failing which they could be charged with a crime.

All the issues raised were noted by the Ministry of ICT which was also represented by its legal counsel.

According to ZICT’s Jacob Mutisi, a list of all the contributions and issues raised will be submitted to the Ministry of ICT and are expected to be considered in the revision of the bill.

The Ministry of ICT has indicated that it is still collecting feedback from all citizens and stakeholders on this draft bill as well as the e-transactions bill and Data Protection Bill.

The next workshop on the draft bills is set to be held under the auspices of the Law Development Commission  in Bulawayo on the 21st and 22nd of September 2016 at the Bulawayo Rainbow Hotel starting at 9am.

All citizens have been encouraged to attend and to continue making contributions via the Ministry of ICT or through their legislators and channels like civic organisations.