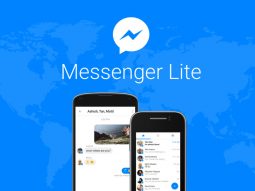 This is a light, slimmed down version of its standalone Messenger application and it’s optimised for slow internet.

It’s been initially launched in Kenya, Tunisia, Malaysia, Sri Lanka and Venezuela with other countries to access in the coming months.

Just like the traditional Facebook Messenger this Lite version is also a standalone app and it provides core Messenger features (sending text, links and pics) which can also be sent to anyone on Messenger.

It’s expected to provide the value proposition that Facebook Lite, another stripped down Facebook service for emerging markets which was launched in mid-2015.

Facebook’s play here, other than an increased access to online services, is the extension of its ecosystem to as many emerging market users as possible in a way that goes beyond just social media.

Considering that Messenger is now being fashioned as a platform that does more than just send stickers and emoji (in markets like the USA it has e-commerce integration and elsewhere – including Zimbabwe – it has ushered in AI integration through bots) this could be Facebook warming up to markets that have the potential to thrive in areas like e-commerce the future.

In Zimbabwe, the high cost of internet services has been the primary challenge and Lite services could play some role in alleviating some of these cost concerns.

So far this challenge has been addressed by Facebook bundles – products from the country’s mobile network operators which extend unlimited access to Facebook for a fixed weekly or monthly subscription.

2 thoughts on “Facebook unveils Messenger Lite for countries with slower internet, doubles down on emerging markets”