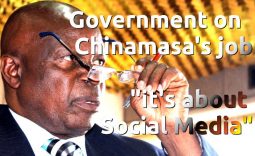 The government of Zimbabwe has confirmed that Chinamasa’s new job is to monitor and clampdown on social media abuse. The government says it there are “rats causing mischief” on social media and their days are numbered. Patrick Chinamasa was appointed the minister in charge of the new ministry of Cybersecurity, Threat Detection and Mitigation.

While in other countries such a government agency tackles important issues like critical infrastructure, cyber espionage and hacker attacks on the financial services sector among other things, the Zimbabwean government says it has established the ministry to combat “social media abuse”. Zimbabweans have been ridiculing the new ministry as a National WhatsApp Group Admin.

3 thoughts on “Video: This is not about cybersecurity, it’s about social media clampdown”