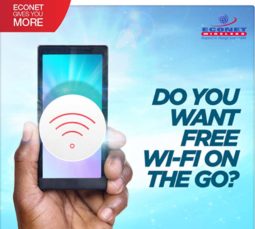 Techzim can confirm that many Econet Wi-Fi hotspots across the country are not properly working.

Our readers were the ones who brought this to our attention by sending us a tip and for that WE THANK YOU.

The problem has been around for two weeks at least as noted by one our readers. On Econet’s Facebook page several customers were complaining about it but there were no responses that indicated the problem was resolved.

The service disruption is signified by customers not being able to access the ‘Login’ to enter their details.

One of the customers who spoke to us had this to say:

I am one of those guys who never criticized econet, all the complains they got for me where reasonably explained as every business has its flaws, but after these past two months, I understand the frustrations of the people who criticize econet. I have an online job and I solely rely on their wifi bundles, in the very least I juice $60 worth of bundles per month, and when business is high close to twice that, right now I have 30GIG and for the past two weeks have been unable to connect, can you imagine. And in an as if “in your face” move, they are busy promoting cows and goats now, we do not need cows and goats, we just need stable internet for a month straight without any hiccups, is that too hard to ask for

We reached out to Econet to confirm the existence of such a problem and here’s their official statement:

Econet Wireless wishes to advise its valued customers that there have been some technical challenges at many of its WiFi hotspots around the country, resulting in customers failing to login to the hotspots.

The company is working to resolve the challenges and sincerely regrets any inconvenience caused as a result of the downtime.

So, you heard it, they knew the problem existed yet chose to stay silent all along. We have come to rely on these services and as far as customers are concerned such services have become a right so the least telcos can do is to keep us well informed if there is any disruption to any service no matter how peripheral the service seems.

The first customer who notified us of this probably makes the point much clearer:

Hie, thanks for the great content. You guys are doing an exellent Job. I believe as Zimbabwe begins to progress online wise, the importance of guys like you will surely be seen. I have somewhat of a complaint, or news or a tip however you are going to take this. I have noticed that you guys are an actuall authority tech wise, and these big companies listen to you and not us their customers.

Well the story is this, Econet wifi hotspots are suddenly down country-wide, for more than two weeks now. I and a bunch of other guys have online jobs. This means we have to be constantly connected to the internet, and we live in an area where econet 3g speeds are bad (4g has not found its way here yet).This also means we rely on the wifi zone econet brought to our area. So every month we buy wifi bundles (which are very expensive by the way) so that we can be online at all times. However some week or so ago,we noticed that the wifi hotspotswhere no longer working.

We contacted some guys we know across the country who do what we do, and they had the same complaint. We then contacted econet, at first, it seemed as if they did not know their system was down. The customer care representative even said I must have been the first person to call in the complaint, and he promised that the issue had been escalated to the relevant department. Well its now close to the second week now and numerous calls later and there is still no feedback, no message from them and no internet.

The sad part is some of us bought these expensive bundles and they are in our phones. One thing I know is that there are thousands of us who where taking advantage of this platform all across Zimbabwe, i know so because upon going to their facebook page, I discovered a bunch of the same complaints in the coments section. As I said, I dont know if this is a tip, complaint or just a rant, either way we are voiceless and thus we turn to you.
Thank you in advance.

There you have it. Two weeks is too long a time to have a problem with your service and you remain silent about it.