When I first saw the President Mnangagwa application I was a bit surprised. This embrace of tech is not what we had become accustomed but looking at the president’s track record thus far it was to be expected. Thus far he has already setup a Facebook, Twitter and a website so an application only makes sense.

Why does the president have an app?

Well the description of the application says:

Presidential News straight from the President himself. Contact your Future ZANU PF legislators via Whatsapp. Discuss national issues with other citizens on public chat. Watch live facebook streams of my events and rallies. Read ZANU PF manifesto and the country’s constitution. Know your rights. 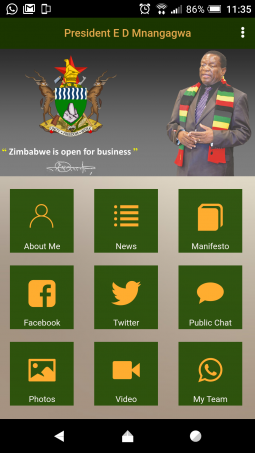 A strange set of permissions

So just after opening an application for the first time you’re usually prompted to grant some permissions to the particular app and the way the prompts from this application were quite funny. Here are the three permissions I was asked to grant:

Allow Mnangagwa to access photos, media, and files on your device?

I’m probably not the only one who finds that funny and a bit weird. I denied this app any permissions – not because I’m hyper conscious about my data but those phrases was just a bit spooky to me.

Back to the issue at hand. The application itself contains the following sections:

Videos in the app are all fairly recent but they don’t follow chronological order so I’m not sure what exactly determines what should come first. This is not an issue right now as there a few videos but if ever the catalogue of videos grows it might be a mess to navigate and find a specific video.

The news section filters out news that only relates to H.E and what he has said. I guess it’s a good way to track everything the President says and it may be the easiest way to track if promises are kept, depending on how long it will get updated and if the current president stays on after the Elections at the end of July.

This section is perhaps the most important in the application, as it allows users of the application to contact Zanu PF Legislators throughout the country. If used appropriately this could offer Zimbabweans and their representatives to have fruitful dialogue but I doubt that this will be the case and this application may end up being used to propagate hate. Hopefully I’m wrong…

The social media aspect is a bit half-baked and I think it was forced into the app, even though the app would have been fine without the social media component.

Before you get into the public chat forum you have to agree to some terms and conditions and I was doing this I expected that the public chat would be filled with either hate speech or just unruly commenters but to my surprise the public chat did not seem to have any of that. Of course there is a risk that as more people use the application the public chat could descend into chaos but from what I saw it was mainly filled with supporters. 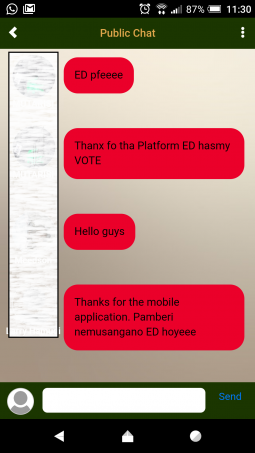 The application also comes with the current ZANU PF Manifesto and even though this is available online as well, its presence here is a welcome one and I’m sure it will offer some people an opportunity to read to the manifesto for the first time. I for one will get to read it so I think it’s a welcome addition.

It’s kind of cool to have a president who finally embraces technology but this app is a hard sell and I would only recommend it to staunch supporters of President Mnangagwa or someone who want’s to check out the Zanu PF manifesto.