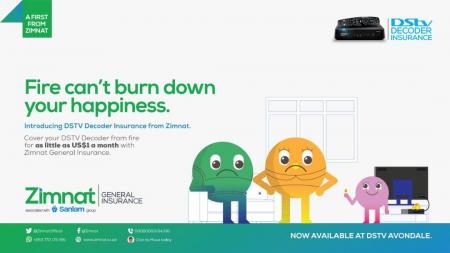 In a series of catchy ads on social media, ZIMNAT insurance has introduced a decoder cover package that starts at US$1. The insurance package which is available at Multichoice will allow you to insure your decoder against fire, theft, floods (water damage) or lightning. In the event you lose your decoder to these mishaps you will be indemnified.

A much needed product

If I was a DStv fan I would certainly consider getting insurance especially given ZIMNAT’s friendly pricing of US$1. Explora decoders, the only decoders worth buying in my view, can be quite expensive. It would be nice to get a replacement when disaster strikes. Especially given how lighting has really caused me pain in the past. I have lost laptops and TVs despite having surge protectors. ZETDC’s wonky grid has a way of behaving erratically during storms.

I actually wish ZIMNAT and other insurance providers would partner with more companies to provide affordable insurance for various household gadgets. I know TelOne has their handy insurance for their modems which is also priced at about at US$1. It really does give peace of mind.

Imagine if you could also get insurance for your TV? I mean really affordable and accessible insurance not the tailor-made general kind where insurance companies send someone to assess the value of your assets that stuff is made for the 1% not general folk. You walk into TV Sales or Mahomed Mussa and they sign you up for something like US$3 per month. That would be a really useful product.

One company that should also do this is ZOL. They used to have Fibroniks insurance for modems but for some reason when I signed up for Wibroniks there was no such option. It doesn’t seem like there is such an option for Wibroniks customers although I could be mistaken in which case they are not doing a good job of marketing that insurance option. My neighbour’s modem charger got fried by an electrical surge and ZOL told her to fork out an astounding US$198 in order to buy a new kit! Again insurance would have made life easy for such a person

Maybe this will revive wider interest in insurance

While everyone will tell you that insurance is a good thing, it’s just not the way we do things in Zimbabwe. There is a reason for that. While everyone likes to mention how banks were at the eye of the 2008 and subsequent storms people conveniently forget to mention how insurance and life assurance companies and the government “betrayed” their customers.

I know people who lost their insurance property to thieves and fire during this period who were given payouts that were nowhere near the value of what they had lost. Some of the problems were caused by the government which for the past decade and a half has preferred to maintain a fixed rate that is divorced from reality. At one time during 2007-2008, the official rate was 250 Zimbabwean dollars per USD while the parallel rate was 250 000 Zimbabwean dollars as to 1 USD.

The fleeing rate plus hyperinflation wreaked havoc on insurance policies. Your property that was valued at $80 trillion one day would be worth 10 times that the following day. How do you calculate premiums or create a policy for such an economy? Naturally, insurance companies tried to find refugee in the USD but the unrealistic official rate did not make that better.

While far from ideal, the current foreign currency regime and the multicurrency system makes USD policies like ZIMNAT’s decoder insurance possible and might actually help spark renewed interest in such home insurance packages.