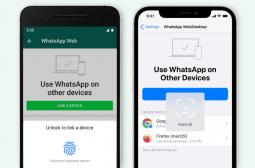 WhatsApp is determined to move the conversation from their new terms fiasco that has consumed their and everyone else’s energy this first half of the year. Mark Zuckerberg the CEO of Facebook and Will Cathcart the CEO of WhatsApp, yes you can be the CEO of an app if it has over 2 billion users, have confirmed the two most important features that WhatsApp will have by the end of the year.

The chief among these is multi-devices support. We recently revealed that WABetaInfo had looked at WhatsApp’s code and determined that the Facebook-owned chat app was in the early stages of receiving multi-device support. What was missing was the timetable. A lot of us cannot wait to have real multi-device support. Something that doesn’t suck as much as WhatsApp web which requires your primary device to be online.

According to WABetaInfo Zuckerberg and Cathcart confirmed that WhatsApp will have multi device support in about two months:

Multi-Device support will mean that you will be able to use WhatsApp on up to 4 devices even if the primary device is offline. The two executives admitted that adding multi-device support is a technical challenge they are still trying to solve. By default WhatsApp uses end to end encryption, and implementing it while enabling multi-device supporting is an enigma they are still grappling with. Telegram solves this challenge by disabling end to end encryption by default.

In an early article, I castigated WhatsApp’s private message set up. Besides sending nudes, which is something Gen Zs seem unable to stop, ephemeral messages are quite useful where security is needed. We have seen more and more Zimbabwean banks and companies start to use WhatsApp bots. They have to given how WhatsApp is the internet in Zimbabwe. Self-destructing messages would be useful in such cases.

For example, a lot of these chatbots ask you to enter some sort of pin in order to secure your chats. For that pin to remain safe you have to manually delete it after sending it. You will also have to manually delete any sensitive messages your service provider or bank sends to you. This quickly gets tedious if you have a lot of services. This is where ephemeral messages would be more than appropriate. the two leaders explained that they would continue. Zuckerberg confirmed that secret chats would be coming to WhatsApp which is great news.

I for one cannot wait for these two features to land. For once we have two features that actually enhance our privacy as opposed to the tumultuous first half of this year during which WhatsApp basically fought tooth and nail to compromise that privacy.