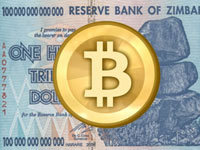 We thought the Zimbabwean government was looking at the possibility of adopting cryptocurrencies. They clarified their position, they most definitely are not. Instead, they are looking at central banking digital currencies.

For a second there we got excited but we all kind of knew that wasn’t going to happen. The govt is not thinking about adopting cryptos and neither is it looking to lift the ban on trading of cryptos.

Whilst we can accept them not adopting cryptos anytime soon, we do however hope the ban is lifted. Different countries have different regulations as regards cryptos and we hope Zimbabwe will at least follow the majority.

We have countries like China that have outright banned all crypto transactions. Russia softened its stance, allowing Russians to trade in cryptos after banning that earlier. Will we bite the bullet and follow the only country that has gone all in on cryptos?

Back in September of this year, El Salvador made bitcoin legal tender. That is in addition to the USD they adopted 20 years ago. Citizens can now pay for goods and services and even taxes using bitcoin anywhere in the country. All merchants are required to accept bitcoin as a payment method.

The country launched a national wallet, Chivo, that citizens are encouraged to use. However, they can use other wallets not developed by the government.

The 40-year old El Salvadoran president is hopeful these moves will transform the country. Their country which has eerily similar circumstances to Zimbabwe.

Why did they adopt bitcoin?

In 2017, only 29% of their population had a traditional bank account. Contrast that with about 20% in Zimbabwe in that same year. Just a month after adopting bitcoin, 46% of El Salvadoran citizens had downloaded the Chivo wallet.

A month was enough to include about half the population, who only need a smartphone to participate. Today, more people have bitcoin wallets than do bank accounts in the country and its only been two months since bitcoin was made legal tender.

In Zimbabwe we did see mobile money rise to improve financial inclusion in the country. In that same 2017, if we included EcoCash Save accounts, a further 10% of the population had a ‘bank account.’

However, since then, the relationship between the regulators and mobile money players soured. Now the govt is actively working to cripple mobile money and so cryptos could have a role in improving financial inclusion as in El Salvador.

It is hard to see that happening anytime soon though. If the govt cannot tolerate a mobile money wallet which holds their central bank controlled RTGS$, I wouldn’t bet the gum stuck under my shoe that they would cosy up to a crypto wallet holding a digital currency they have zero control over.

The third world experience is a universal one. Just like Zimbabwe, El Salvador has a large number of citizens living abroad and supporting families back home. Remittances of US$6 billion by these people in 2020 were equal to about 23% of the country’s GDP.

In Zimbabwe remittances accounted for ‘only’ about 6% of the GDP in 2020. However, at US$1 billion, the govt was ecstatic and admitted that’s the reason we had a current account surplus. It does appear that 2021 is going to beat that figure by an estimated US$300 million.

When there are literal billions exchanging hands, even transaction fees as low as 2.5% translate into millions. Zimbabweans have complained about the fees charged to send money to Zimbabwe through services like Western Union.

As a result, over the years, many companies have sprung up to offer this service. Some are still standing and some have left us. Mukuru, Uhuru, BitMari, WorldRemit to name a few. You will note that we already have crypto-based remittance solutions for diasporans sending money to Zimbabwe. That is not counting people like the truck and bus drivers who offer the same service for less in transaction costs and more in risk.

The El Salvadoran govt estimates that if adoption of bitcoin and remittances through their Chivo wallet takes off, remittance providers like Western Union and Moneygram will lose around US$400 million per year in commissions. El Salvadorans indeed have been complaining about how much it costs to remit from the US where most of their diasporans are located.

How has the experiment gone so far?

The El Salvadoran govt fully committed to the project and installed crypto ATMs, gave citizens a  US$30 sign-on bonus and educated the populace on the development among other things. They even negotiated with the largest service stations to offer fuel with a US$0.20 discount for Chivo app users to drive adoption.

So, despite detractors which included the IMF, and the opposition party which organised protests during which some ATMs were burnt, progress has been swift. There were some hiccups in the first days as some users could not find it in the Play Store/App Store. For those that downloaded it, high usage caused server crashes and the app wasn’t working. However, they weathered the storm.

About half the population now has crypto wallets through which around $2 million is sent daily. Users are warming up to the benefits of bitcoin. Mind you these people are not saddled with a fast depreciating currency like the RTGS$. Yet, this early into the exercise, users are already holding on to bitcoin rather than convert back to the USD at the earliest convenience. The stats say inflows of USD quadruple the outflows.

When it rains (even blessings), it pours. It so happens that bitcoin has appreciated in value since the country adopted it in early September. The govt created a bitcoin trust for the country and are building 20 schools with the profits they made from bitcoin appreciating in value.

There is still a long way to go though. About 93% of retailers say they have not had a single bitcoin transaction. Large chains like McDonald’s were quick to jump on the new opportunity.

Some smaller chains reported early surges when people tested the new payment method and spent the US$30 gift they got from the govt. The news from those smaller retail shops is encouraging as some are reporting that 20% of their sales are now in bitcoin.

We do have a financial inclusion problem just like El Savador. So we would see similar gains from bitcoin adoption to some degree.

Some will say that those that are excluded from the financial system are the ones most likely to not have the gadgets and/or know how to utilise crypto wallets. That was the same argument in El Salvador. Yet it appears crypto is even more inclusive than traditional bank accounts.

We found out that 59% of Zimbabwean households have a smartphone. That right there means even though 41% would be ‘left out’ we would probably be able to include more than are currently served by the banking industry.

By offering a cheaper way for diasporans to remit back to Zimbabwe, we could increase the remittances made. A national wallet which forgoes or charges very little for remittances would be a good move. This would help both the individuals involved through lower transaction costs and the nation at large, through more forex inflows.

Then there is the issue of our unstable RTGS$. Cryptocurrencies like bitcoin can be even more erratic in the short term and so could not be ideal for day to day transactions. However, in the long term, at least since the RTGS$ was introduced, bitcoin has appreciated massively whilst the ZWD has lost most of its value. Rather than hold our savings in the USD which itself is steadily losing value, all Zimbabweans would have a different (better?) store of value.

Having said all that, I’m not holding my breath. We might be stuck in the ‘consultative process’ for the foreseeable future. The hope is that even if we don’t make bitcoin legal tender like El Salvador we at least allow willing participants to deal in the cryptos of their choice. But again, even this might be more than the govt can allow at this time.

10 thoughts on “Zim has much in common with country which made bitcoin legal tender, so…”