Everything is ‘with immediate effect’ with the Zimbabwean govt. Lending is unbanned as quickly as it was banned.

It was only 10 days ago that we were surprised to hear that the government was suspending lending in the country. The ban on lending was extensive, preventing all financial institutions from lending to any individual, corporate or even the government.

It was clear to all Zimbabweans that the economy could not operate without lending. We knew that businesses that rely on credit facilities would be affected and this would in turn pressure the government to lift the lending suspension.

Soon after the suspension was announced, many businesses tweaked their operating procedures, announcing that they too were removing their own credit facilities.

These businesses were only able to offer their customers credit because they had lines of credit from banks. So, a company like Surrey meats that offered restaurants/butcheries meat on credit could not continue to do so.

Meaning in one fell swoop, the lending suspension cost banks interest revenue, cost Surrey and the customers they gave meat on credit sales revenue. It was a snowball effect. All companies in the chain were affected and it is this impact that the government underestimated.

Surrey announced they were no longer in a position to offer credit terms with immediate effect. Many other companies made the same decision. Even Tongaat Hulett announced that they would not be able to offer farmers any advance payments.

It is with regret that the millers advise of the immediate suspension of advance payments until further notice.We normally fund the advances from loan proceeds that we access from the banks. Following the recent suspension of lending by banks we find ourselves unable to continue offering advances.

When we covered the lending suspension we noted that it appeared that in the government’s desperation to catch the economic hitmen responsible for the ZW$ collapse they were going to leave too many casualties.

Even the farmers that are more or less carrying the Zimbabwean economy were immediately affected by their economic measures.

Luckily for us, the government swallowed its pride and lifted the lending suspension after only 10 days. 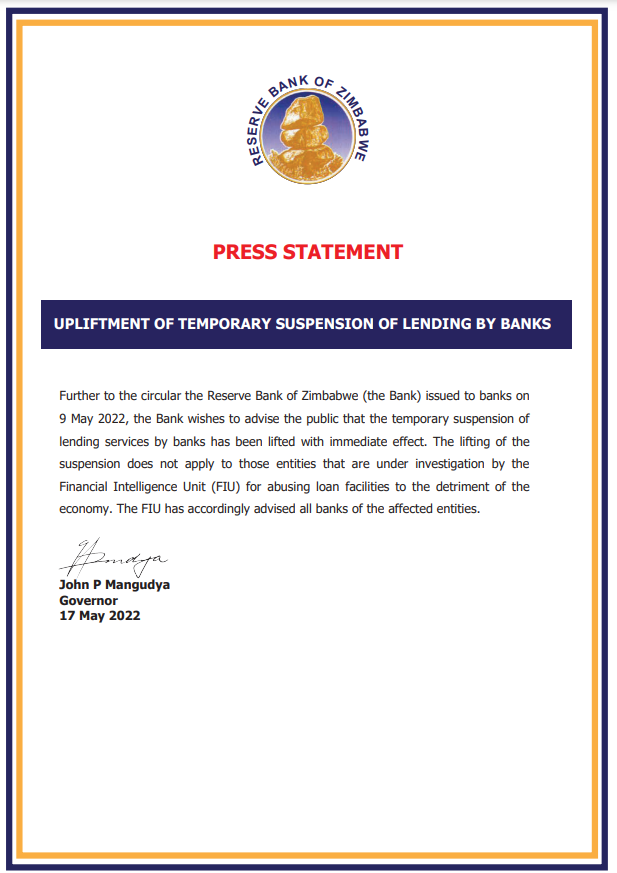 UPLIFTMENT OF TEMPORARY SUSPENSION OF LENDING BY BANKS

Further to the circular the Reserve Bank of Zimbabwe (the Bank) issued to banks on 9 May 2022, the Bank wishes to advise the public that the temporary suspension of lending services by banks has been lifted with immediate effect. The lifting of the suspension does not apply to those entities that are under investigation by the Financial Intelligence Unit (FIU) for abusing loan facilities to the detriment of the economy. The FIU has accordingly advised all banks of the affected entities.

It has been an embarrassing 10 days for the RBZ and the government. It started with them having to make some exceptions to the blanket ban only days after announcing the ban.

“Those trading in key commodities such as tobacco, maize, sugar cane, soya bean and other related products are exempt from the suspension of lending facilities by banks,” came the clarifications as they tried to backtrack from their ill-advised ban.

Now, the ban is lifted for everyone except those under investigation but this is not a win for the government even if they catch the speculative borrowers they were after. It may have only been 10 days but our biggest problem in Zimbabwe remains that of trust.

The quick backtrack is not a win

The RBZ and the government recently revealed that they understand that the most important job they have is to build back trust. Uncertainty is probably the biggest hindrance to Zimbabwe attracting both foreign and domestic investment.

We have woken up to drastic economic measures in this country one too many times. The govt loves surprising us with statutory instruments and RBZ directives and this makes it risky to operate in Zimbabwe.

The govt saw fit to outlaw a sector’s core business activity with no warning and I wonder how that is supposed to instill confidence in the economy.

The crazy part is that backtracking on that decision makes it worse – it appears to outsiders that they made that decision on a whim and did not think it through.

If you were surprised when Standard Chartered announced that they will be exiting Zimbabwe, the events of the last 10 days should open your eyes. I imagine that all the other banks will be holding back on any investments as they realise that not even they are safe from disruption by the government.

Zimbabwe is a joke sometimes. Anyway, if you’re fortunate enough, go forth and get that loan you need.

RBZ on suspension of bank lending. Partly drawn loans are suspended too. What is the rationale behind these decisions?

With lending suspended, banks will be okay but microfinance institutions likely to struggle