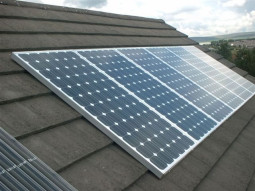 For obvious reasons you want to purchase a solar system for your home but you are not sure of which one to get or where to get it. We did a piece on prices for solar systems from different stores in Harare just to compare the costs of the different systems. In this article, things are going to get a bit more technical but I did my best not to get too much into the weeds.

What is a solar system?

A solar system has 3 major components. The solar panels that convert solar rays (sunlight) into electricity, batteries which store power for use when Zesa or the sun is not available, and the inverter which we know as being the one between the panels and the batteries performs duties that include charging the batteries and supplying power to the house from the panels or the batteries.

In this article, we will be looking at a 5KVA system or a 5000W system which is enough to power an average 3-bedroom house comfortably assuming appliances like electric stoves, electric geysers, and air conditioning systems/heaters are not part of the list.

The battery will also be a lithium pack with a 48V 100Ah (4.8KWhr) capacity which is the standard for our system. There are a lot of brands available in each of these 3 major components of a solar system. Let’s find out which is the best.

Solar panels come in many different sizes in terms of the power each panel produces. The number of panels you put up depends on the power output of each panel, the capacity of your inverter, and the stuff you intend on running during the day.

The ideal is that the combined power of the panels should be greater than the power being consumed by the running appliances. This ensures that during the day the battery stays fully charged and the more excess power the panels produce, the better.

This is by no means an exhaustive list when it comes to solar panels and shops. However, it offers a decent look at what is popular in the market.

So here the best panels looking at value for money are the Jinko 400 Watt panels from The lithium battery and solar shop at Avondale. These offer the lowest price per watt meaning you get more power for less.

It’s worth mentioning that the Canadian Solar panels can also produce power from the back side of the panel which is up to 30% of the power that the front of the panel can produce (Bificality). Depending on how you mount it you can harvest more power through more of the day than with other panels. It’s amazing on paper but in real life, I doubt it counts for much.

Generally, if you can you want to buy bigger capacity panels so that you use less of them and save on roof space or maximize on a small roof. Bigger panels mean more area on your roof is dedicated to harvesting solar energy as there is less roof area being occupied by joints between panels. The bigger the panels the better.

To ensure the system is not too complicated it is also recommended you buy panels of the same size (Watts). This reduces complexity by eliminating the need for extra circuits and components to manage the power coming into the inverter. The less complex a system is the cheaper it will be and also the more reliable it is.

When sizing solar systems it is recommended that you use the STC values for the power a panel produces. The NOCT/NMOT values are not really crucial for sizing. These STC values are the values that panels are rated with so if a panel is said to be 400 Watts that will be the STC value.

As stated in the intro we are looking at one type of battery which is the recommended battery for a 5KVA system. A 48V, 100Ah (4.8KWhr) lithium battery. In a well-designed solar system, no power should be drawn from the batteries during the day. On a sunny day, the power from the panels should be enough to charge up and keep the battery charged with excess power to run any appliances you need to run.

The best way to ensure that the battery lasts long is by ensuring that appliances that draw a lot of power are run during the day. These can be appliances that produce heat/contains a heating element like kettles, microwaves, hair dryers, or appliances with heavy-duty motors like borehole pumps or pressure pumps/booster pumps.

The table below will show you how long the battery will last with different types of appliances running. It’s just a theoretical table. In real life temperature of the battery makes a significant difference and also the bigger the load the hotter the batteries get. For the nerds the formula is: battery life(hrs) = 4800Whr ÷ load(Watts)

So from this table, you get an idea of what you can run with just one battery. If you need to run a lot more appliances during the evening then you may need to consider adding more batteries. The keen-eyed may have noticed that my table does not get to 5000W even though we are talking of 5000W systems.

The reason is that the 5000W is what you can get during the day when drawing all that power directly from the panels. The maximum power the batteries are able to provide is 4800W and it is not advisable to do so because it will rapidly degrade the battery. Also, the temperature won’t allow you to do so.

And as you will see in the table below, some batteries won’t even allow you to draw beyond 50% of the available power (2400W). So with some napkin mathematics, I will say that the load on your battery should never go beyond 25% of the capacity of the battery or 1200W. Once you demand more than that you need to add another battery till your desired power demands are met. These restrictions only apply at night or on overcast days. When it’s sunny outside the limit is what your panels can provide.

Batteries are the single most expensive component of solar systems. The cheapest battery on this list can buy 6x455W panels which is half the number of panels you’ll need for a 5KVA system. And the average life of the batteries is 10 years given you stick to their preferred conditions. The biggest condition is to never run it to empty.

In terms of which one is the best battery, Pylontech and Huawei offer the best flexibility when it comes to how much juice you can get out of them. Huawei also has a built-in theft detection system where if it detects that it’s been stolen it will not work when connected until the theft detection is disabled. It’s a nice trick.

That’s not to say the other batteries are terrible. In fact, if you are not a tech head they help you with prolonging their life because of how restrictive they are. In other words, they’ll do the job for you. Whichever battery you choose from these ones will perform well enough.

It’s also advisable that batteries be stored in a well-ventilated area. That way they operate at a good temperature for the best performance and also reduce the risk of fires from overheating.

The brains to the whole thing. An inverter is an amazing invention that does quite a lot including:

Inverters are now very advanced to the point of some of them having apps and communication tools that allow you to monitor the state of your solar system and manage the parameters of the system. For those that love tinkering this is a very exciting feature. You can even see if you have electricity even when you are not at home.

The price spread is wild I know. Looking at specs alone very little separates the inverters except for the most extreme case which is the Victron inverter. It is modular so most of the bits that are missing from the main unit are bits that the rest of the inverters have built-in.

As much as it can be used in domestic applications, where it’s best suited if commercial settings where it has to operate in a less than ideal environment because it can take it. If the charge controller fails on any of the other inverters then you need to buy a new one. With the Victron inverter, the charge controller is external making it easy to replace if it fails.

Typically inverters are given a 2-year warranty by the retail outlets so if you get one that has a warranty longer than that it’s a pretty good inverter. From this list, you can pick any really. There is not much between them in terms of performance.

Something to note about inverters is that you can use multiple inverters for a bigger capacity. So you can take 2x5KVA systems and make a 10KVA system. You can also put multiple batteries on the same inverter for longer battery life. So depending on your energy needs you can configure your system to suit you.

If you are going fully off-grid you need to spend more money on batteries, a robust inverter, and panels to ensure the batteries are charged fully for the night and that they are big enough to last the night.

For those looking for just a backup solution for load-shedding then you can go a bit easy on the batteries and get a more affordable inverter to keep costs low. Since you can still charge the batteries with utility power you can even use fewer panels to further drive down the cost of the system.

This is just the work of an enthusiast. I am by no means a professional. The deductions made in this article are based on specs on paper. How all these products actually perform in the real world is something I have not tested.

In addition to that, the prices in this article are prices from quotations obtained 5 months ago. They are only in here for reference only. You definitely will need to contact the various stores to get more up-to-date pricing.

The comments are open. Let me know what brands of panels, batteries, and inverters you are using.

24 thoughts on “The best solar system to buy in Zimbabwe”