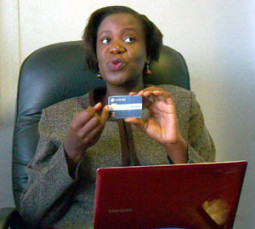 Yesterday we attended a press briefing by a new payments company called SmartPay. The company has launched a financial services system that users can access using a smart card. In the background, the SmartPay system is basically a switching system enabling financial institutions to receive deposits, users to withdraw money, merchants to process payments, organisations to pay salaries, users to transfer money amongst themselves, to save money, pay bills, pay bus fare and various other uses.

All these uses will be possible via a smartcard which the user carries around and transacts with at special Point of Sale devices that SmartPay is already deploying around the country. Effectively the user and the different other stakeholders transacting with the user, will supposedly benefit from the cashless transacting.

SmartPay, according to the company, is expected to link the payment systems of all banks, savings and loans companies and Building Societies in Zimbabwe. It’s a model they call “banking without banking halls”. The point, SmartPay Managing Director Miriam Mutizwa says, is to reach the majority of transacting Zimbabweans who currently do not have access to a bank account – the unbanked.  Mutizwa expressed some confidence that banks will find this new service quite attractive, and through the Reserve Bank of Zimbabwe, will all keenly sign up.

This of course is not guaranteed. Existing switching systems that have attempted to do just what SmartPay intends to do – organisations like ZimSwitch – have failed to sign up all banks locally. But that’s not the only potential problem here; the banks themselves are gradually ceasing to be the centre of financial services for these micro payments that the unbanked carry out. Mobile operators are moving into the centre and they are determine to disrupt the traditional banks.

To make matters worse, the SmartPay solution doesn’t have a mobile side; “not yet, but we will be adding that in the coming months” says Mutizwa. This alone could be SmartPay’s undoing, unless they do something about it soon enough. Using SmartPay in its current form, one can’t, for example, check their account balance via SMS, or have a transaction that’s just been effected on their account confirmed (or at least notified) via a mobile device. This age is about information being available at the finger tips, whether that’s via SMS, MMS, 3G, or fixed broadband internet.

We also feel that the one thing their marketing efforts may suffer from is the problem of trying to be everything for everyone. It would make more sense to solve one problem and solve it well. EcoCash for example has come to the market first to solve the local remittances problem, and so far it looks the market is accepting this solution, at least their record subscriptions numbers (ok, some of it pushed by free airtime offers for signups) are testimony to this. Later they will do merchants, utility bills and other functionality, once their system has been proven to be robust and secure enough by the market.

Google in Kenya, has also come to the market with a card based payments system, Beba, to solve a specific problem; to help people save money by enabling them to pay bus fare on matatus (our Kombis in Zimbabwe). In Kenya, just like in Zimbabwe, “The bus conductors and matatu touts have been known to hike up bus fares the moment it starts raining or when there is traffic.”

You can download the full SmartPay press release sent out yesterday here.