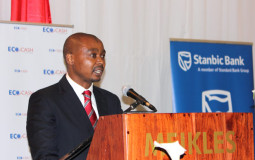 We’re just from a press conference where Econet Wireless and Stanbic Bank announced the integration of Econet’s mobile money transfer platform, EcoCash, with Stanbic’s banking system allowing EcoCash subscribers to transfer money between their wallet and the Stanbic accounts, as well as to get statements via their mobile phones. Selected branches of Stanbic will also act as EcoCash Super Agents allowing EcoCash agents and customers to do physical EcoCash transactions there.

Stanbic becomes the third bank to integrate with EcoCash in recent months. The other two, CBZ Bank and TN Bank, connected to EcoCash at the end of 2012. In addition to the standard integration that Econet was making with banks, the new mobile banking integration with Stanbic also allows EcoCash subscribers on the Roaming out of the country to transfer money as if they were in Zimbabwe. We are told this feature will be coming to the other banks as well in future. Econet says it will be integrating with two large banks in the coming 10 days.

Stanbic is the first international bank (it’s a member of SA’s Standard Bank group) to integrate with EcoCash. Econet executives at the conference said the bank has a solid brand internationally and this is likely to open new opportunities for Econet.

The integration with Stanbic comes just after Econet publicly accused ZimSwitch, CABS (a local building society) and CABS Bank MD Kevin Terry of using the Bankers Association of Zimbabwe (BAZ) to front a campaign to frustrate EcoCash. The campaign in question is the appeal made by BAZ to the telecoms regulator POTRAZ and the Reserve Bank of Zimbabwe to get them to ‘regulate’ EcoCash. So far the BAZ says Econet is just buying time confusing everyone with basically baseless allegations.

Speaking the press conference today on the development Econet Services CEO, Darlington Mandivenga echoed an EcoCash radio advert that says ‘Yazviita futi EcoCash’, Shona for ‘EcoCash has done it again’. “We have done it again,” he said “we say that humbly but with no apology.”

Mandivenga went on to mention that as far as they are concerned “there’s no direct competitor of EcoCash in this country” explaining that the product was different from all other offerings as regards the number of distribution points (a total 2,500 now he said), security, convenience, reliability and speed of platform.

Asked by a member of the media how many Stanbic Bank subscribers would benefit from the development, a senior executive from the bank was quick to say that to fully comprehend the impact people actually have to know that Econet has 8 million subscribers “so any other statistic pales in comparison”,

We asked both Econet and Stanbic why they had chosen to integrate with banks individually yet it seems more efficient to integrate via an existing financial switch, ZimSwitch. To this Mandivenga responded that ZimSwitch was just another alternative among many in terms of integration and that it was up to the banks to choose the integration method that makes business most sense to them. “We don’t play a part in how the bank decides to get connected,” he said.

A Stanbic executive at the event also responded that as a bank they are pushing other services via ZimSwitch namely the Zipit service. He added that the point is to provide all these alternatives to the customer by not exclusively working with one partner. He also mentioned that Zipit has been talked about for a while and yet EcoCash has moved with speed.

Also responding to the question, Econet Wireless Zimbabwe CEO, Douglas Mboweni said that people have to look at the investment Econet has made to sign up the 8 million subscribers they have, as well as into the ‘engine’ that runs the network and the mobile money services. “We want direct access to serious players; we will not waste time haggling over issues when we know there’s a more efficient way to establish connection with some players,” he said. “We’re looking at big brands having a direct handshake; why would we want a middle man?” he asked.