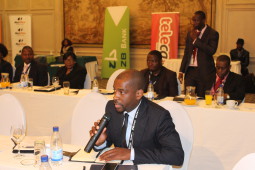 The Digital and Mobile Payments Ceremony and Awards held today turned out to be a melting pot of ideas and insights on issues around the state of payments in Zimbabwe.

With every notable player in this industry present, there was lot that was shared, on and off record. However, one remark that stood was from EcoCash, the mobile money service from Econet.

Under the topic of “Opportunities for interoperability among players to achieve financial inclusion”, each of the Mobile Network Operators had representatives that were given the opportunity to respond to the accusation that they are not doing enough to enable interoperability themselves before the regulator calls for it.

Nettcash, even though its list of services and customer base is still way below the network operators, is network agnostic, representing operability.

Econet, however, could not explain why they have not taken the enabling steps in allowing interoperability. Econet responded that they,

are of course interested in interoperability but would rather not discuss the nitty-gritties at the Forum.

Attendees took this as a confirmation of the general conception that Econet, because of its huge subscriber base, operates as somewhat of a monopoly without a consideration for synergies with other players.

This attitude seemed to suggest that EcoCash hasn’t changed its stance which resulted in hostile relations with banks. At some point, this situation saw Steward Bank, the financial institution owned by Econet, being blocked from third party transaction acquiring business.

Econet reportedly attempted to curtail agents operations by trying to enforce network exclusivity before the national regulator interjected and instructed otherwise. This same stance from Econet is a huge clog in the infrastructure sharing implementation.

In line with its business model, Econet is actually enabled to interoperate with willing banks. EcoCash has connected to some of the major banks including CBZ, Stanbic, Steward, ZB, BancaABC and NMB bank. The major contention with the banks is that Econet has enabled the EcoCash platform to PULL money out of the banking sector and made difficult the reverse process of transferring money from the wallet to the bank.

On its part, the Econet argument is supposedly the same as with Infrastructure Sharing. Econet has spent huge capital outlays in establishing a market. As a business its not quick to want to share with competitors via opening up their agents, infrastructure or services.

In one of the paragraphs inside this story, we erroneously attributed actions taken to enforce network exclusivity to Zimswitch, instead of Econet. This was a reference to the mobile money agent wars from 2014 and had nothing to do with Zimswitch. The error has since been rectified. We apologise for any inconvenience caused by this mix-up.