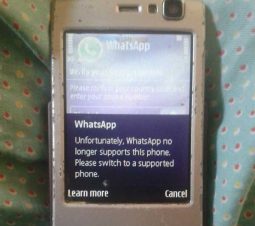 Back in 2016 Whatsapp discontinued support for older phones running Android Éclair (2.0-2.1) and Froyo(2.2). Most of the people affected at the time probably had no idea that the reason they could no longer use their handy messaging app was because the hardware was too old.

More devices getting the axe

Next on Whatsapp’s hit list is Android Gingerbread (2.3). Support for Gingerbread will be discontinued in 2020 and this will affect a number of people in Zim. Though the Gingerbread version of Android is now years 8 years old and it will be 10 years old by the time support is cut this will probably affect quite a number of users locally.

The cut will not only affect Android users but Apple phones running iOS7 will also be getting the cut. So depending on which version of Android or Apple you’re using you might want to upgrade your device.

As most of you will know, in Zim when the average person buys a new phone all they are concerned about is whether they can access Whatsapp or not. This means people rarely bother about what version of Android is on their smartphones and they are more concerned with the fact that it’s working right now.

However, if you do buy a phone with this software in 2018 or 2019 you’re going to have to part with more money sooner rather later as you will not be able to continue using the service once support has been discontinued.

As indicated earlier, Zimbos usually buy phones with one thing on their checklist; does Whatsapp work on this phone. If yes: proceed to buy phone. If no: look for phone which has Whatsapp. If you’re in the market for a new phone just be aware that the phone may be able to access Whatsapp now but in two years time you will have to buy another phone.

For those looking for new phones, just ask whoever is selling the phone what version of Android that phone has. If you hear him/her utter 2.3 or Gingerbread. Walk out of there. And make sure your money is still in your wallet when as you walk out.

According to latest Android distribution numbers, there are about 3 million people still using Android Gingerbread. That’s quite impressive for an operating system that’s 10 years old. To those who already have a phone and you’re not sure which version you have, you can check which version of android you’re running in a few simple clicks. First, go to settings and then go to the About phone section and proceed to software info. If you have anything over 2.3 you can rest easy. If you’re using 2.3 then you can start counting down the clock.

If you’re on iOS(Apple) go to the settings and then General>About and you’ll see the current version of iOS you’re running.

Some popular Android devices which are using this O.S and I have seen being used include;

It’s mostly samsungs because that’s a really popular brand but there are probably some devices we may have missed. Anyway, the gist of the matter is: if you have a phone still running Gingerbread YOU NEED TO UPGRADE…