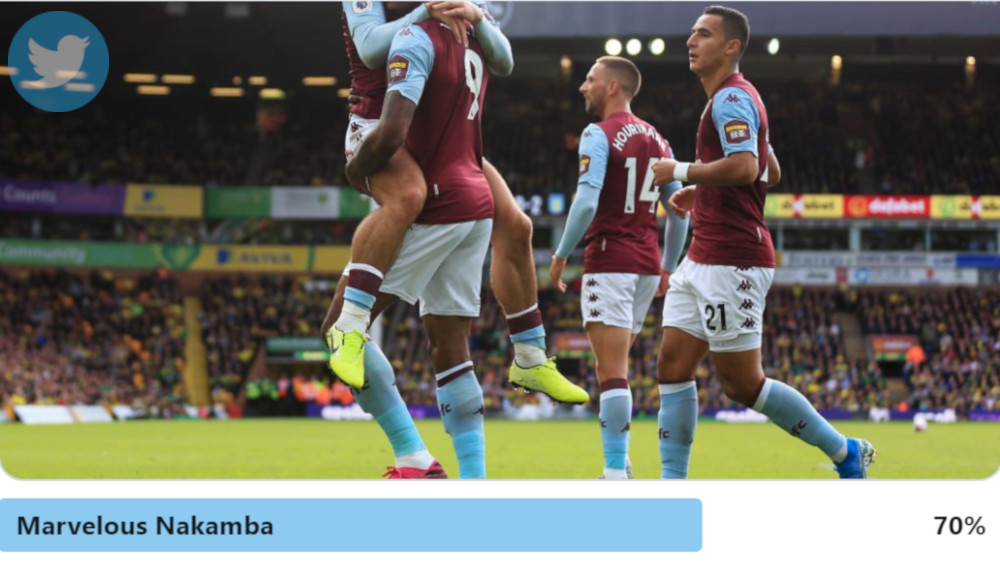 Twimbos – the collective term used to describe Zimbabweans on Twitter – have indeed come a long way. Just under a decade ago, when the platform had only a few active and consistent users, most Twimbos tended to know each other personally. And where they didn’t, physical meetings would be convened here and there for community members to get to know one another and debate at greater length than the 140-character limit that the platform allowed for at the time.

Now, it seems Zimbabweans on Twitter have become a force to be reckoned with, if recent polls for UK’s Aston Villa club’s player ‘Man of the Match’ polls are anything to go by. About last week, I caught wind of the orchestrated attempt Zimbabweans – regardless of what English premiership team they support – are making to vote en masse in these Twitter polls to ensure that Villa’s new Zimbabwean signing, Marvelous Nakamba, gets the accolade whenever he is listed as an option to receive it.

This past weekend, I participated in the poll and at its close at midnight on Sunday, Nakamba had garnered 70% of the 31 720 votes for ‘Man of the Match’. That equates to 21 889 votes in his favour. His nearest contender, Wesley Moraes of Brazil polled 13% of the votes; a mere 4 124 votes. The week before, Nakamba again won the ‘Man of the Match’ Twitter poll, garnering 58% of 26 431 votes, even though that win was a little bit more competitive with second-placed John McGinn securing 38% of the vote.

To put the numbers of votes in context, the goal of the month poll (in which Nakamba was not in the running), conducted on October 2, garnered just 6 416 votes.

In a time where many have become more wary of social media solidarity, Nakamba seems to offer an opportunity for Zimbabweans to rally around an issue of national identity and pride that doesn’t bring along with it the challenges of geopolitics and the economy, two areas that many Zimbabweans on Twitter engage with regularly – often to bruising and tiresome effect – with nonchalant politicians and opinion leaders such as government ministers and representatives.

Even influencers like popular musician, Jah Prayzah, are getting in on the act; Prayzah – with his over 111 000 followers – quoted the tweet put out by Aston Villa for this week’s poll, writing “Awww this is Marvelous”. In many ways, this energy is reminiscent (at a much smaller proportion) of Kenyans on Twitter, or #KOT as they are commonly referred to, that amorphous lobby group of Kenyan Twitter users that congregates around different issues, especially when their nationhood is under attack. As one Kenyan friend once joked, “Kenyans are so serious about #KOT that even a boss will give you time away from your work to log into Twitter and fight whatever Twar is being fought at that time.” And indeed, #KOT have scored significant wins, one of their most prominent being forcing an apology from CNN after the news broadcaster termed Kenya “a hotbed of terror” in 2015.

According to reports, although a thorough analysis of statistics does not as yet exist, Zimbabwe had just under 200 000 Twitter users by early this year. This was compared with about 1,1 million Facebook users. And it’s certain that Whatsapp has an exponentially higher user base than Facebook, as it is the lingua franca of social media in Zimbabwe, reportedly accounting for 50% of data usage in the country.

Previously Zimbabweans on Twitter have shown their presence most especially through the 2016 #ThisFlag campaign, a movement that began when a frustrated pastor, Evan Mawarire, recorded a video of himself outlining what each colour on the nation’s flag represented and promised and how he felt cheated by the post-independent government’s failure to deliver on many of these promises. While some termed the movement elitist, and it must be borne in mind that there is a vast disparity in access to the internet in Zimbabwe, the movement – along with other grassroots movements and lobby groups – did yield important space for Zimbabweans to express national identity and solidarity within an increasingly repressive environment.

What is perhaps new, or at least different, is Zimbabweans expressing this identity and solidarity through sports. In June, a national twar between Uganda and Zimbabwe was ignited when a Ugandan user implied that Zimbabweans did not know what Twitter was, just ast the two nations were to take each other on in an African Cup of Nations match. And thus was born the #UGAZIM hashtag which featured a back and forth of disses between Ugandans and Zimbabweans, in much the same way that the bigger Twitter players on the continent – like Nigeria, South Africa and Kenya – often engage when a national from one of those countries says something demeaning about one of these other countries. #UGAZIM revived once more during the Netball World Cup in July, albeit less concertedly.

Even as data costs continue to rise (resulting in significant drops in mobile data usage and active internet subscriptions in Zimbabwe, as per statistics shared in POTRAZ’s Q2 sector performance report; this quarter’s findings represent the first time in one-and-a-half years that mobile internet and data consumption have recorded a decline) and mass ZESA outages affect access, Zimbabweans continue to find ways to get online and engage in different experiences of navigating and expressing their Zimbabweaness, and a solidarity that is perhaps less precarious and likely to dissipate as quickly as those that have been formed along geopolitical lines have.

Now, the amorphous legion of #Twimbos await the next twar or Twitter poll, on the ready to enlist as many other #Twimbos in a performance of identity and expression of community.

Who knows, we might soon be ready to take on the big fish in the continental twars.

Fungai is a digital media researcher whose areas of interest include online solidarities and identity navigation and expression on the internet.