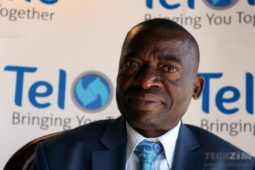 Recently we had the opportunity to interview the TelOne chairman, Charles Shamu. We spoke about TelOne’s ADSL business, the fibre, it’s subscribers, the issue of infrastructure sharing and TelOne’s plans to enter the mobile data market this year.

Below is the interview:

Soul Kabweza: We notice the emphasis now on Fibre at the expense of ADSL. Has TelOne given up on copper?
Charles Shamu: The reality is that copper has limited capacity for data so as demand for data increases it cannot cope and we have to use fibre on the network.  As a last mile solution it’s still there but we’re replacing the network with fibre. That’s why we have the upgrade project which we are hoping to start implementing equipment within Q3 this year. And that there is the start of the phasing out. We are removing all the mechanical switches and replacing them with IP based switches.

SK: How long do you expect this project to take?
CS: We expect that at the end of 2017 we’ll be fully done.

SK: Right now there are 333,000 voice lines but only about 76,000 ADSL lines. There has been a slowdown in growth of broadband connections from about 90% year on year around 2013 to just about 20% growth currently. Why?
CS: The problem is 2-fold. The one is the economy which is not performing. And the second portion is the slow arrangement to the loan [98 million from China Eximbank] that we anticipated. We expected that by now we’d be at the tail end in terms of implementation of the project. But it took a bit of time to negotiate and it has only come to fruition this last few days in terms of clarifying the scope, and now the vendor is supposed to start to roll.

SK: The Finance Minister today spoke of a renegotiation of that loan having taken place.
CS: It was not renegotiation. It was re-scoping. Which means when we signed the $98 million loan initially , whatever we decided, is not what the people want.  There are several people that are moving away from services like DSTV to go for Video on Demand (VOD). Even at offices there is now the need for video conferencing. People don’t want to travel to Bulawayo for a meeting when they can video conference from here. These are services that were not in our initial scope so we have decided to incorporate such things, and remove other things which we see that we can already do using Over the Top Services.

SK: In terms of this rescoped agreement, was there any compromise in terms of capacity of the technology being bought for the same $98 million?
CS: We actually increased the coverage because now with the closer cooperation between us and NetOne. Where we were going to make base stations, we’re not going to build any. We’re going to use NetOne base stations. Effectively we have reduced the need for towers all over the place.

SK: By how much therefore do you expect to increase the broadband subscriber base from the current 76k that are on ADSL?
CS: We’ll probably grow ADSL by an extra 100,000 by the end of this project.

Take NetOne for example with maybe 4.5 million subscribers compared to our 270,000, but we have a higher revenue on our subscribers than they do. The fixed services have a mean holding time. If you’re on a mobile phone, you;re probably there for a second but with fixed you’re there for a longer period and as a result the revenue is higher for us. Of course mobile has the advantage of mobility.

SK: How many of those active subscribers are unique. Or rather, how many of those subscriptions are business vs consumer?
CS: The consumer portion is smaller. 20% is consumer and then the 80% is split between government and business.

SK: What about the split between the government and business
CS: About 60% private and 40% government.

SK: Is the intention to create a different company for the infrastructure stuff?
CS:  No. They will remain arm’s length companies within the same holding company. Like you have your ZESA with ZEDTC, ZPC and other things. Because if you create individual companies you’re also now creating barriers and there will be no synergy in terms of operations. That’s why we want to keep them as divisions because it’s easier to manage with a single board and single management. At divisional level you then have operations.

So this company that will do the infrastructure and wholesale, it will look after the equipment for the other companies and those companies only compete on services.

SK: And these are just government companies. Are private players welcome?
CS: We want to see how it will work first. You probably heard the ICT Ministry permanent secretary  say the intention is to see what is the value of the government infrastructure.  And then we approach the private sector and say, ‘look, this is the value of our infrastructure which is has been audited and if you want to join us we get yours valuated as well and we bring it to the pool.’

They become a shareholder in that company that will be formed and then it’d become a complete free outside [of government] company which just runs infrastructure and build other new infrastructure. The operators only compete on service in that arrangement.

SK: Right now, which are the 4 companies sharing through the TelOne infrastructure division?
CS: It’s ZETDC, NetOne, TelOne and Africom.

SK: So the arrangement means control of those assets has been handed over to TelOne?
CS: Not control of the assets but just in terms of implementation. They just bring their assets to the common pool. So TelOne is more of  the centre of coordination than a new owner. Ownership remains in the hands of the partners.

SK: Has the model been worked out in terms of how much each partner contributes and how much it benefits on its books?
CS:  This is the process that now has to be carried out by an independent auditor who will audit the value of the assets because obviously it’s service that will not be done free of charge to partners that will access this common infrastructure.

So for example, if I sit on a ZESA tower. The tower has already been valued and it has an expected return per year a return, and that amount is divided amongst the number of companies using it. So instead of ZESA carrying that whole cost 100% they now have 2 other companies sitting on the same tower and it means that the cost is shared. NetOne a bit, TelOne a bit and so on. So the tower is paid for quicker.

SK: So this auditing of the value and determination of a rental model, has it been done?
CS: This is the process that’s going on at the moment.

SK: When do you expect to complete it?
CS: It involves the State Procurement Board and there’s been a lot of red tape which the Finance Minister (Chinamasa) assures us has been removed and that we’ll be able to do these things without the State Procurement Board. We’re looking to have this done by third quarter this year. At that point, any of the government players can approach this TelOne infrastructure division and get an immediate quote for whatever infrastructure they want access to.

SK: Let’s talk about TelOne CDMA service. Is it dead?
CS: CDMA has problems especially of revenue leakages. We had a very small network of CDMA which was only in Harare.

SK: So do you think CDMA services provided by Powertel and Africom are going anywhere? Do you think these two companies are doomed?
CS: You see. It’s a different business model that they have. If you look at Powertel the service they give to the consumers with the CDMA dongles is a side business. Their core business is to provide network management for the [electricity] grid. Their core service is to provide a facility for ZETDC to manage the grid , then the excess capacity they have from that is what they are selling to the ordinary person for communication.

If you look at Africom, their core business before was to do government to government interconnectivity. Back then they were a 100% privately owned company and they were able to source equipment and they were useful for government departments that needed fibre. But government has its own companies now that can provide it fibre connectivity like us at TelOne and we are much larger than Africom. So obviously the quality of service that you get from Africom and what you get from TelOne will not be comparable.

SK: Despite government not paying their bills they owe you and now you  begging the minister to offset the bills with what you owe ZIMRA.
CS: No, they do pay.

SK: Ok, let us talk of the TelOne mobile license. TelOne was granted a mobile license by the regulator years ago, and that license has not been operationalised to date. What are the plans?
CS: It’s part of what we’re going to do now with this $98 million broadband project. We expected to be started in the 3rd quarter. We are not going to be focusing on mobile voice. Just mobile data.

SK: So what is that exactly? LTE?
CS: Yes. That’s what we’re looking at.

SK: How do you see the growth comparing the mobile data to the fixed broadband business like fibre and ADSL?
CS: We expect the fixed data to move much faster in terms of growth. People are going to consumer VOD, offices will need video conferencing. So even though our fixed network is much smaller than other mobile networks, that guy sitting in the office is going to consume more.

Do you plan to provide in the OTT space in terms of providing content
CS: No, we don’t want to provide content.  Broadcasting is not our business. We carry the traffic.