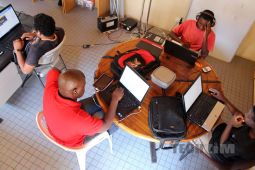 2021 was a year to remember for Zimbabwean startups, we saw a number of firsts starting of what I think might be the story of the year by way of a freelance platform called AfriBlocks. The US-based Zimbabwean startup became the first-ever in the country to be selected for the illustrious TechStars Seattle Cohort. This achievement also made Africblocks the first Zimbabwean Startup to be chosen for a US-based accelerator.

Techstars is probably on the same level as Y-Combinator when it comes to prestige. The program has raised over US$11.4 billion in funding for over two thousand startups with 85.8% of them being either active or acquired.

We at AfriBlocks dare to design the future of work in Africa and beyond. Through connecting a growing network of African freelancers with paying jobs across borders, we are poised to do our part to offset the impending global tech talent shortage. In a major boost to our efforts, Afriblocks is honoured to announce that we have been selected as a part of Techstars Seattle’s 2021 cohort!

Afriblocks followed that up by co-hosting this year’s edition of the Black Blockchain Summit and got US$100,000 from Google’s US Black Founders Fund.

The firsts didn’t stop there as local blockchain startup FlexFinTx became the first-ever Zimbabwean entity to be selected for the World Economic Forum’s Tech pioneers Cohort. For context, this is the same program that giants like Twitter, Google and Spotify all pitched their ideas. And to be honest FlexFinTx could change Zimbabwe whenever the country opens up to blockchain technology because they’re crafting digital identities for the millions who don’t have any form of IDs not just locally but across Africa.

According to the World Bank, there is an estimated 1 billion people in the world who don’t have any form of identification. The biggest proportion of those individuals are in South East Asia and Sub Saharan Africa (81%). These IDs are on the blockchain which makes them secure and could open up Zimbabwe to a secure online voter registration program.

Zimbabwe witnessed its first-ever Drone and UAV (Unmanned Aerial Vehicles) conference this year and it was through the hard work and determination of Precision Aerial and Zimbabwe Flying Labs. We were in attendance and there were drone experts and enthusiasts from all over Africa and the world.

It was also incredibly encouraging to see parastatals like the Zimbabwe Electricity Supply Authority (ZESA), The Civil Aviation Authority of Zimbabwe and others showing how far they have come with drone regulation and adoption.

These two made it to the finals and were awarded a share of US$750,000 (along with 8 others) in funding and services from the Telecel Group (ASIP) and Startupbootcamp Afritech Accelerator. Thumeza was selected because the startup is trying to bridge the financial slump that independent haulage operators endure between jobs before they get paid. While Dawa Health is fighting to reduce maternal mortality in Africa by enlisting aid workers to provide antenatal care to expecting parents.

Agriculture has been a part of Zimbabwe for a very long time, so it wasn’t surprising to see one of our own shine on the global stage. FarmHut is a local agritech startup that helps small scale farmers reach wider markets. The startup was awarded US$100,000 from the Hult Prize foundation for their concept and went on to partner up with the ZImbabwe farmers Union shortly after

Bryt Knowledge and Gateway to Elation

Bryt Knowledge, a local Edutech startup, was among seven finalists who received backing from JUA Kickstarter, a US$2 million fund that was set up by Zimbabwean businessman Adam Molai. Bryt was selected because it offers a bespoke e-learning experience for students as well as courses that are missing from the traditional curriculum like money management. Gateway to Elation, on the other hand, is an inclusivity initiative for the visually impaired that was awarded US$25,000 by the Holman Prize for its work helping persons with visual impairment gain independence and be more socially active.

2021 was something else and we are all excited to see what Zimbabwean startups do on the international stage. We were also encouraged by smaller startups we interacted with this year like the five bicycle logistics service Mutsapuri, EduXpert an e-learning outfit that is looking to replace brick and mortar schools, ZimTorque which launched an electric vehicle financing program and many others.

The determination and ingenuity exhibited in 2021 will no doubt push the Zimbabwean startup ecosystem to greater heights in 2022.