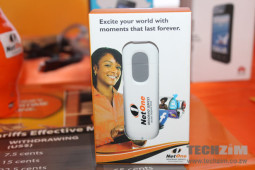 “Ambition should be made of sterner stuff.”

That ought to be etched on every business manager’s wall, especially before setting targets and making projections. All industry captains have to keep in mind the fact that whatever goals are set need to be met with an equal amount of elbow grease. Which is true, even for state-owned enterprises.

Right now, a lot of attention is fixed on the Innovation Africa Digital Summit. There seem to be one or two interesting things coming out of Vic falls after all. This includes announcements and opinions from ICT business leaders.

One big takeaway so far was covered by The Herald in an article that quoted the CEO of NetOne, Reward Kangai‘s statements on the targets set by him and his team. The State-owned mobile network operator is targetting revenues of $200 million this year.

$200 million. Yes, I can hear the sniggers that came after that. The cynic in all of us is wondering where this optimism is coming from. But truth be told, the man might be on to something after all.

Around the time Kangai was making these bold pronouncements, the local telecoms regulator, POTRAZ, released its latest quarterly report, a sector-wide assessment that shows how the local communications industry is doing.

What we’ve learnt from the latest figures from POTRAZ (please bear in mind that the report is for the last quarter of 2014) is that NetOne is doing better than most would have expected actually.

In an environment where NetOne’s competition, Econet and Telecel, has been shedding subscribers, NetOne has actually experienced an 18% increase in its subscriber total. This is significant in this $200 million quest because all of NetOne’s aspirations are based on an exponential growth of its subscriber base.

According to Kangai, the objective is to have a subscriber total of 5 million by the end of 2015. Now, given the fact that for it to grow from its current 3.19 million subscribers (give or take 200,000 subscribers) to this number is a 51% increase, this comes off as a bit too ambitious.

I don’t think NetOne will try to use the Telecel tactic of offering huge discounts on all services. That option won’t work if you are chasing revenues in a constrained economic environment and jeopardises the quality of service, something that disappoints the subscribers you want to retain. So what is the plan though?

Difficult means it’s hard, but it can be done

To make these sets of figures a reality ($200 million and 5 million subscribers), NetOne simply has to maintain its quarterly 18% subscriber growth rate and boost its Average Revenue Per User(ARPU), currently at $3.35 marginally. The truth is, it’s a lot more difficult than it seems, but it can be done.

There are doubts because we haven’t seen NetOne work on any new product or service delivery model that can lure another 1.7 million subscribers to its network. Recently it introduced WhatsApp and Facebook bundles, a late entry into a service line that the other operators have been offering already.

The jury is still out on how these services will positively impact NetOne’s Average Revenue Per User, but if WhatsApp and Facebook consumption patterns that have been noted by both Econet and Telecel are any indication, the ARPU for NetOne ought to experience a positive shift.

At the very least it will cultivate the loyalty of frugal subscribers that had migrated to Econet and Telecel for access the cost effective communication options that bundles offer.

What will work for NetOne?

We’ve heard Kangai harping on about the $200 million LTE project that NetOne is working on, but the fruits of exercise aren’t immediate. Sure, it will likely help NetOne keep up in terms of mobile tech (LTE is the future, every telco has to deal with it). But with our smartphone penetration that falls below 25% it’s hard to look at 4G as the saviour any MNO needs in Zimbabwe right now. This explains the limited investment into LTE tech from infrastructure leader, Econet.

A top priority should be its mobile money business service, OneWallet. According to POTRAZ, NetOne only holds 0.1% of mobile money deposits, the lowest among the three operators and a crumb in comparison to Econet’s 98% hold.

There are no marks for originality, just fast implementation. That’s the unwritten mantra for Econet Services and EcoCash. That 98% hold on deposits has been a result of a combination of factors that include growing mobile money subscriber numbers aggressively,and then extending mobile money to every channel that handles any form of cash in the economy. This was “adapted” from other mobile money success cases elsewhere.

Perhaps OneWallet should also look at having its service in salaries (think civil servants payroll), diaspora inflows, fiscal payments and a tango with an aggressive financial institution. Relying on one party trick, like the ZESA payments only, won’t get private sector performance results. Just look at how TelOne is operating.

At the risk of encouraging NetOne to be a corporate vulture, another strategy for ensuring immediate revenue growth should focus on taking advantage of the struggles that Telecel is facing. NetOne has to shore up anyone who wants to have that second SIM Card and be that number 1 optional network.

A year ago that would have sounded ludicrous, but now Telecel is faced with internal challenges that revolve around ownership, a subscriber base that has been shrinking at an alarming pace (a loss of 400,000 subscribers is a big problem) and just like every other business operation in Zimbabwe, macroeconomics that make it harder to keep the lights on every month.

Sure, NetOne is showing how ambitious it is, and the sector will greatly benefit from that sort of mindset from that operator. Everyone’s hope, however, is that it matches that with the right sort of execution and show that it’s just as “stern.”